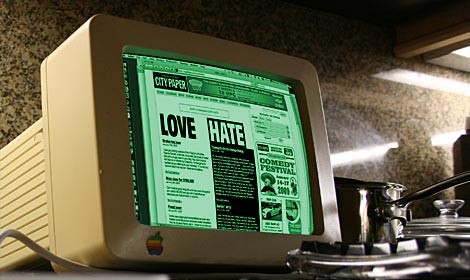 Image by Monitor image by Flickr user someToast; Overlay by Ken Hawkins/TheDigitelImage by 20090112-love-hate.jpg Underhanded message not intended, going old school got the better of me.

The Charleston City Paper is giving you a place to hate the love ... or is that love the hate?

Well, at any rate, they're giving you a spot to voice your opinions about things you love, and things you hate.

Here's the Charleston City Paper has to say about it:
Love. Hate. Funny things both. If you don’t express yourself, well, these feelings have a way of messing you all up inside. Which is why you’ve got to get those feelings out. And we’re here to help. With I Love You/I Hate You, we’re inviting you, our readers, to sing the praises of that hottie you saw at the club last night — you know, the one that wasn’t the douchebag with the popped collar and way too much Pick Up Artist Body Spray — or totally diss that ditz who cut you off in traffic — you know the one who was texting, putting on make up, and singing the latest tune from Britney Spears.

Now, I've got some love and hate of my own to share.

First off, I love the spirit of the idea. But, I've got some grumbles about the execution. It looks like staff is moderating users comments, and nothing has been added since Saturday -- which is incredibly lame online. But, it's new, and they could still be polishing the execution.

Secondly, doesn't Craigslist's "rants and raves" section do this already?

So, it seems Charleston now has a couple options for the rants and raves it needs:
Craigslist, which is crapshoot of gold and junk.
The Charleston City Paper, which seems good but isn't very timely.

What would be really sweet is if The Charleston City Paper's section allowed folks to "digg" the best.

Still, what the City Paper is doing could be enough to refine Craigslist's style to some gold.

But, here's a link to the the LOVE | HATE section.

Update January 14: The City Paper gave me some feedback saying they're constantly in touch with the site and the reason that 10 posts went up Friday and only one went up for the weekend was because that's how they came in.

They also added that the reason for the disclaimer of "City Paper reserves the right to edit submitted material" is not to moderate for language, only to remove names of people and businesses.