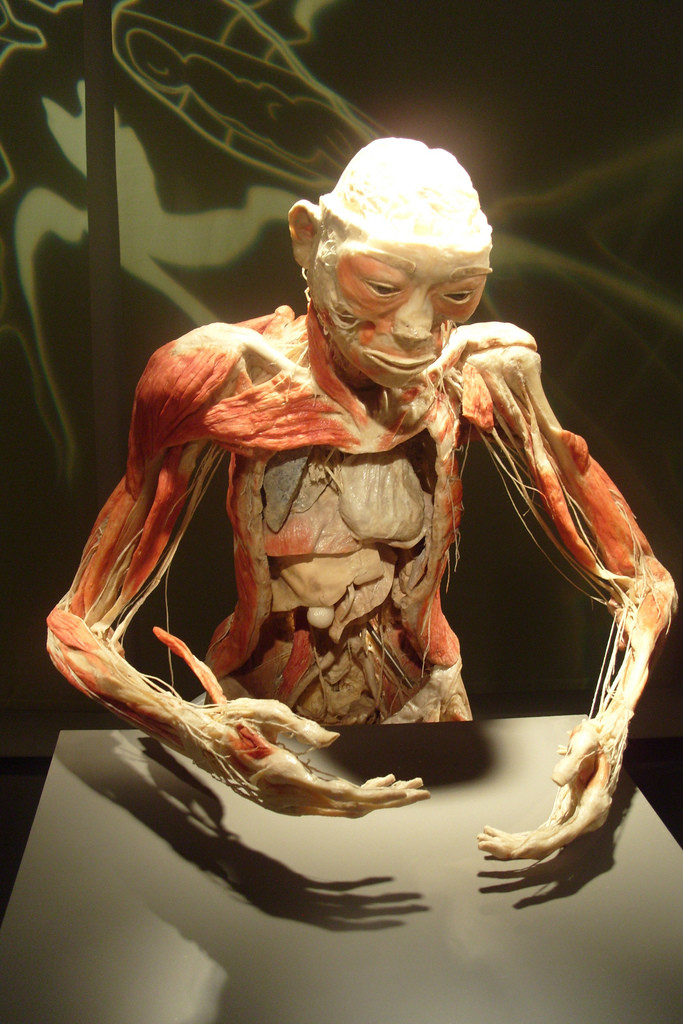 For more information, check out their press release.

Bodies Revealed will give locals $4 off on admission. The regular ticket price is $14, but locals from Horry, Georgetown, Marion, Florence and Brunswick counties will pay $10. Residents must show a valid ID at the exhibit box office to receive the discount.

Created by a team of medical professionals, this unique exhibit reveals the internal workings of the human body in unprecedented detail. Visitors see human specimens preserved to the cellular level, as well as aspects of anatomy that are usually seen only by surgeons and other medical professionals.

Hop on over to Grand Strand Happening for some more details and make sure to read our first reports below.

Update January 27, 2012: Premier Exhibitions is bringing Bodies Revealed back to Broadway at the Beach at the end of May.

"After such a very successful run last year, we're thrilled to bring the Bodies Revealed exhibit back to Myrtle Beach's Broadway at the Beach," said Katherine Seymour, vice president of communications with Premier Exhibitions, Inc., the company that presents Bodies Revealed. "The response was overwhelmingly positive and this is the first time we've brought Bodies Revealed to the same location twice. We hope that people who didn't have a chance to view the exhibit last time-and those who loved it and want to come back-will come to Myrtle Beach and check it out."

The Exhibition will be located on the northeastern side of Broadway at the Beach and cost $14 for adults and $10 for children. Children under the age of three are free. It will be open Sunday through Thursday from 11 a.m. to 8 p.m., and Friday and Saturday from 10 a.m. to 10 p.m.

See our prior reporting below for more information.

Update August 23, 2012: Officials with Bodies Revealed have announced the exhibit will stay open for at another month after Labor Day.

The extension was made in large part to give teachers and students around the region an opportunity to come out and see the exhibit as a field trip in the first several weeks of school. The price for students will be $6 and admission will be free to one teacher or chaperone for every 10 ticketed students.

In addition, Bodies Revealed will host two "Free For Teachers Nights" on Thursday, Aug. 25 from 4 p.m. to 7 p.m. and Friday, Aug. 26 from 4 p.m. to 7 p.m.. On those nights, teachers will receive complimentary admittance into Bodies Revealed, as well as a special teachers' packet. Those interested can get in free by bringing a school ID or paystub with them to the box office.

Beginning Sept. 5, the new hours for the Premier Exhibitions, Inc. exhibit will be 12 p.m. to 8 p.m. Tuesday through Saturday. It will be closed Sunday and Monday. On the days the exhibit is open, the last ticket will be sold an hour prior to closing time. There will be a locals discount of $10 for adults and $8 for children with a valid Horry or Georgetown county driver's license. For non-residents, tickets are $14 for adults and $10 for children. Children under the age of three are free.

First Report: Broadway at the Beach will play host to this one of a kind of exhibit that is sure to amaze and intrigue your mind and how you think about the human body.

The exhibition uses 14 full body human specimens and over 200 organs to tell the story of the miraculous systems at work within each of us every second of our existence. Rooted in the historical precedent set by such great anatomists as Vesalius and da Vinci, each full body specimen is dissected to best reveal the function of a complete anatomical system and to show that system’s relationship to the body as a whole.

Bodies Revealed, a new exhibit examining the human body in skeletal and mussel form unveils itself along the Grand Strand May 14.  It's full exposure will be on display at Broadway at the Beach until September 5, 2011. Presale tickets are $10 with an additional $5 option for an audio guide. After the exhibit goes live tickets range in price from $10-$14. You can purchase tickets direct online at TicketWeb.

For complete info check out their website at http://www.bodiesmyrtlebeach.com/