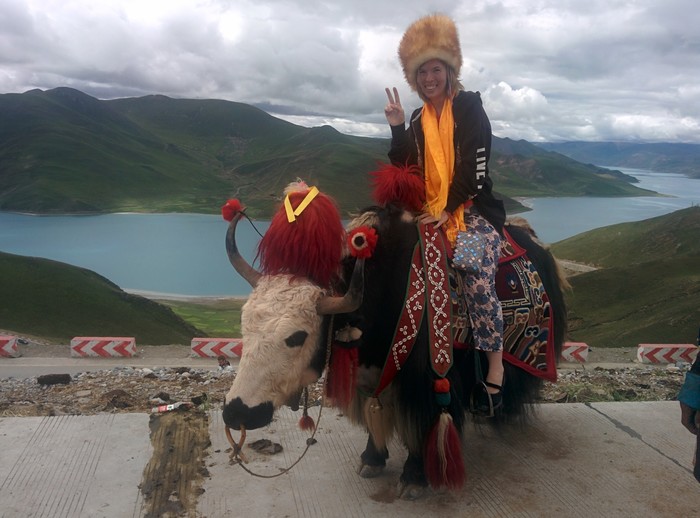 10:31 am on Tuesday May 12, 2015 | Posted by The Citadel
For one veteran student, who is now a nuclear missile operations officer, a leadership career just beginning

Strolling happily down the Avenue of Remembrance in jeans with a backpack, Elizabeth Stephenson was The Citadel's own version of a non-traditional student—she is not a member of the South Carolina Corps of Cadets, but attends undergraduate day classes. She was part of the college's growing population of veteran students; former members of the military who are drawn to the culture and atmosphere of a senior military college. After three years in the U.S. Air Force as a 1C551 Airman (responsible for airspace control and monitoring) stationed in Germany, Stephenson left active duty temporarily, to attend The Citadel through the Air Force Scholarships for Outstanding Airmen to ROTC (SOAR) program.

Stephenson began her college career with a specific purpose: to complete her degree and earn a commission (officer’s position) in the Air Force. With her goal defined, she initially took few classes beyond those that were required. But the ambition that had earned her the confidence of the Air Force won out. As a sophomore, she began exploring opportunities to prepare her to become a regional affairs strategist (RAS); an Air Force officer with regionally-focused expertise. Foreign language skills are essential for RAS officers, but Stephenson had delayed enrolling in language courses her first two years. She resolved to make up for lost time and opted to study Chinese which is one of four foreign languages taught through the advanced level at The Citadel.

While her decision to study Chinese supported her regional interests and her professional objectives, it presented challenges: the language is one of the most difficult to learn for native English-speakers. The Foreign Service Institute estimates that 2,200 hours of study are required for a native English-speaker to reach general proficiency in Chinese. To become fluent by the time she commissioned, Stephenson knew she would need more than just classroom time: she needed intense immersion through study abroad.

In Beijing, she pored over characters for five hours a day, four days a week, learning the required 50 new words daily. After weeks of language study and excursions across China, she became enthralled with China and applied for and won a nationally-competitive Boren Scholarship to support a full semester of Chinese-language study abroad.

After a summer and semester in Beijing, and advanced study at The Citadel, Stephenson, became one of the college’s first graduates with a minor in Chinese on May 9, 2015. She regards her language study, particularly her time abroad, as a boon for her adaptability and problem-solving skills. The day before graduation, she commissioned in the Air Force as a nuclear and missile operations officer. She won’t speak Chinese professionally on a daily basis yet, but the traits she developed while learning the language will see plenty of use. To achieve her long-term goal of becoming an RAS, she must keep developing her language skills on her own. If her dedication so far is any indication, she will not disappoint.

Noah Koubenec is the coordinator of Project GO.  He graduated from The Citadel in 2011 with degrees in political science and Spanish.  He is a Truman Scholar and the 2011 David Shingler Spell First Honor Graduate.