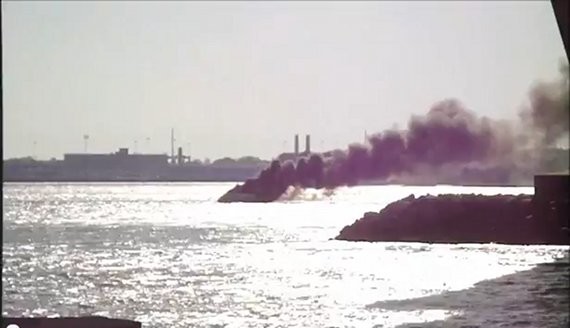 The four people on board were evacuated to safety with no injuries reported. The boat, however, was not so lucky. It sank near the Arthur Ravenel Jr. Bridge.

There's video, shot by Ted Childress, of the boat billowing black smoke into the harbor. View it here.

Coast Guard search-and-rescue coordinators at Sector Charleston received a radio distress call from the crew aboard the Wild Blue Yonder at approximately 5:19 p.m., stating they were on fire in the vicinity of the Ravenel Bridge with four people aboard and needed help.

A good Samaritan in the area witnessing the fire, transferred the four people to safety aboard their vessel.

Once the boatcrew from Station Charleston arrived on scene they established a 150-yard safety zone around the Wild Blue Yonder. Fire fighting boatcrews from North Charleston, Mt. Pleasant, S.C., and Sullivan's Island, S.C., arrived on scene and tried to put the fire out. Charleston Police Department and Charleston County Sheriffs office marine units were also on scene to assist with the fire and the safety zone.

The cause of the fire is under investigation.