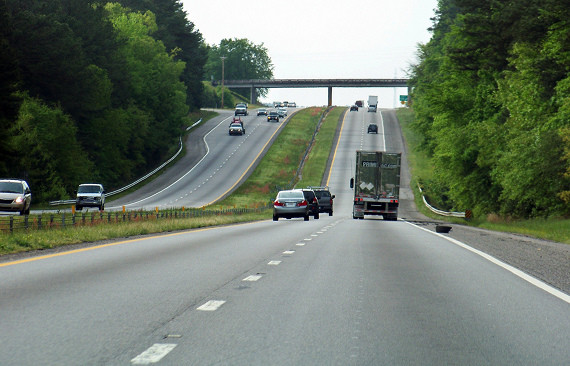 Update July 27: It's been several months, but it looks as though the "death zone" on Interstate 26 is getting more negative attention.

Over the past year, the death zone, which is just northwest of Summerville, located between Jedburg and Interstate 95, has been site of nine fatal wrecks. In the past decade, there have been over 20 fatal wrecks in the zone.

State highway engineers have taken the reigns and have been investigating the death zone. And they have a couple of projects that could help. The first involves epoxying pavements markers on the left edge of the fast lanes throughout a ten-mile stretch near Harleyville. When drivers near the edge of the lane, towards the center median, they'll be alerted by the loud bumping noises caused by the markers. This project is estimated to cost $96,000.

The second project involves repaving the asphalt on a 16-mile stretch near Ridgeville. A four-foot-wide shoulder in the median as well as rumble strips will be constructed on this stretch. The idea is that the wider shoulder can help to reduce wrecks.

Find out more about the projects and the death zone over at The Post and Courier's report here.﻿

Update December 11, actually one: The Post and Courier is reporting that state troopers accidentally omitted one fataility.

Get the details in this report.

Update December 10, no fatalities: The stretch of I-26 once known as the "death zone" has seen no fatalities since state troopers cracked down on aggressive driving four months back.

Even better news: the extra patrols to reduce traffic deaths and crashes will remain in effect indefinitely.

Stemming from The Post and Courier's Watchdog report, State Transportation engineers and surveyors are working diligently to gather data for possible safety upgrades on Interstate 26 through the Ridgeville "Death Zone."

Brett Harrelson, state safety engineer had this to say to The Post and Courier:

The department's planners began gathering wreck data last fall and are doing surveys on 20 to 30 miles on I-26 through Berkeley and Dorchester counties. Among other things, surveyors are measuring slopes next to the highway, the width of the highway's asphalt shoulders and the proximity of trees to the pavement. Harrelson said he hopes the survey will be done next month. "Until we get that data, we don't know our options," he said.

This deadly stretch of road has inexplicably claimed more lives than anywhere else on South Carolina's Interstate 26. Hop over to The Post and Courier for more.

After a mile by mile analysis of South Carolina's Interstate 26, The Post and Courier has uncovered that the stretch of four-lane highway around Ridgeville has claimed more lives than any other part of this important South Carolina roadway.

So what is to blame for this stretch of roadway's high fatality rate? Officials have many theories, but no real answers.

Hop over to The Post and Courier for more on this curious case.