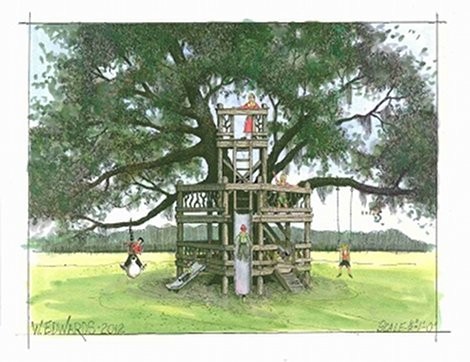 8:34 am on Thursday September 20, 2012 | Posted by Amanda Click
Artist known for grand tree houses to build structure at The Ponds in Summerville

An artist known for his unusual and environmentally-friendly treehouses, located as far as Puerto Rico and as close as Palmetto Bluff and Daniel Island, is building a new treehouse at The Ponds – a 1,950-acre master-planned community in Summerville.

Greenwood Communities and Resorts, who owns The Ponds, has commissioned artist Wayne Edwards of Okatie to build the structure to surround a beautiful grand live oak tree in an area behind its historic farmhouse.

The new Ponds treehouse, which should be completed by the end of October, will provide three levels of play features for kids, including slides, ladders, swings and a lookout tower. Edwards designs all of his treehouses to incur no harm to the tree and to be built around the tree, allowing room for movement and growth.

Edwards, who has worked with companies around the world, has built more than 40 treehouses in his career, including several at Palmetto Bluff in Bluffton and one at Daniel Island. He is primarily a sculptor and is widely recognized for his sculpture of Neptune at Shelter Cove on Hilton Head, an iconic marker on the island. He also built a shrimp boat play area for Disney at the company’s Hilton Head resort.

Greenwood selected Edwards for the project after reviewing the options for commercial play equipment and not finding anything they felt was worthy of the historic site. “Each one of his treehouses is a work of art but is also very functional,” says John Morgan, community manager for The Ponds. “People young and old love to use them and we’re proud to be able to bring this quality of artwork to the town of Summerville and such a unique amenity to the residents of The Ponds.”