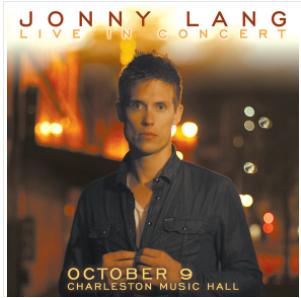 Tickets can also be purchased at Music Hall Box Office:

If the blues is all about the crossroads, Jonny Lang is standing in the right place. Lang is the ideal representative of a new and innovative generation of blues artists – one who respects and reveres the traditions of the past, yet isn't afraid to embrace more complex and evolved genres and graft them to the blues foundation to create a hybrid sound that is both traditional and fresh at the same time.

Indeed, on any given night, impressively large crowds at a Jonny Lang performance are likely to hear shades of R&B, soul, gospel, hard rock, funk and more. All of it is packaged in a high-octane guitar-and-vocal attack from an artist who has covered countless miles since his teenage years, and continues to explore new horizons with confidence and enthusiasm.

Lang's trajectory over the past two decades has been fascinating to watch. Born and raised in Fargo, North Dakota he was introduced to the Motown sound early on by his parents. Lang got a taste of something a little more fundamental and powerful at age 12, when his father took him to see the Bad Medicine Blues Band, a mainstay of the Fargo club scene. Suddenly, it was all about the blues – and even more importantly, all about the guitar. Within weeks, Lang was taking lessons from Bad Medicine guitarist Ted Larsen. By the time he was 13, he had developed sufficient chops to land a spot in the band.

The group moved to Minneapolis, renamed itself Kid Jonny Lang and the Big Bang, and recorded the independently-released Smokin' in 1995. Lie To Me, the 1997 follow up album propelled by a hit title track, introduced the 16-year-old Lang to a worldwide audience. The young guitarist's affinity for funk, soul and gospel was already apparent on Lie To Me, as well as the Grammy-nominated Wander This World, released in 1998.

During a five-year recording hiatus, Lang stayed busy on the stage. By the end of his teen years, he had already supported world tours for Aerosmith and the Rolling Stones. Other stage credits include tours and/or performances with Buddy Guy, B.B. King, Jeff Beck, Ron Wood, Bono and Sting.

Lang returned with Long Time Comin' in 2003. An amalgam of blues, rock and soul, the album reflected Lang's growing talents as a songwriter and producer.

It all came together three years later with the gospel-influenced Turn Around, the 2006 release that landed Jonny his first Grammy win. "That was an amazing moment in my career," says Lang. "The idea of winning a Grammy had never been one of those things that really lit a fire under me. But then after it happened, I got an understanding of what it really means to go up against some amazing world-class musicians and win."

That all being said, Lang still considers himself to be very much a work in progress – on all fronts, musical and otherwise. "In my own life, music has been such a powerful force, and I know that's the case for a lot of people. I've seen how music can give people the strength to change. After years of witnessing that, it's become more of a focus for me to write songs that really count. I'm a blues musician, but I'm also much more than that," he says. "I'm still growing as an artist and as a person, and I'm always contemplating different ideas as my world view changes. There's still a lot more to do, and I want to accomplish as much as possible while I can.

Lang is currently in the studio working on a new album (his first in seven years) which is due out this fall.

Head to the source at charlestonmusichall.com