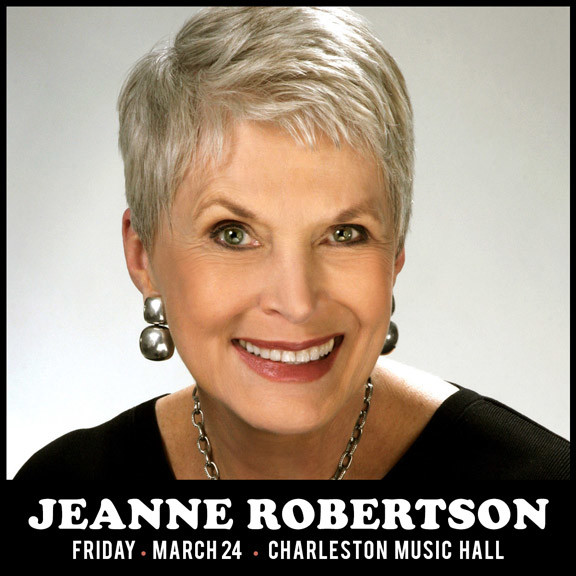 Jeanne Robertson is a professional speaker who specializes in hilarious humor based on her life experiences. Speaking  to thousands of people annually, she utilizes her positively funny style to illustrate that a sense of humor is much more than a laughing matter. It is a strategy for success.

Other speakers might be as witty as Jeanne. Some might even be as tall. (Barefooted with her hair “mashed” down, she’s 6’2″ in her size 11B stocking feet.) But nowhere will you find a speaker so adept at turning personal experiences into funny material that does more than elicit laughter. This Miss Congeniality winner in the Miss America Pageant, “Yearrrrrrrrrrrs ago,” quoting Jeanne, uses her down-home Southern drawl to leave her audiences laughing . . . and thinking about her message. Jeanne’s success as a humorist has not gone unnoticed by her peers. She has been awarded every top honor in her profession including the top award in professional speaking “The Cavett Award.”  She is also a member of the Speakers Hall of Fame and recipient of Toastmasters International’s Golden Gavel award.. They like her back home too. The NC Press Association named Jeanne its 2001 North Carolinian of the Year. Most recently, he National Speakers Association honored Jeanne with its 2012 Master of Influence Award.You may have seen this Hall of Fame speaker being interviewed by CBS correspondent Morley Safer on “60 Minutes” . . . or watched one of the eight humor DVDs she has produced in the last 18years . . . or heard her daily on Sirius/XM Radio’s Family Comedy Channels . . . or attended one of the “Just Jeanne” humor shows in theaters across the country . . . or seen her YouTube clips that have had more than 38+ million views.  But only if you’ve seen Jeanne in person at one of the thousands of speeches or theater shows she has given over the past 53 years can you really appreciate why she stands at the top of her profession.

Jeanne Robertson is funny. Oh my, yes. She also knows that her job is far more than being funny. Her message is that a sense of humor is an attitude, an approach toward working with people. She believes that this humor attitude can be developed and improved, and she outlines how to do so while captivating audiences with funny, original stories.

Sit back and enjoy the YouTube clips below.  Or, to see more, click YouTube.  You’ll see why one syndicated TV segment about Jeanne’s work was titled “Grandma Goes Viral.”  She certainly has!  And people everywhere are laughing and having fun!

For an additional $32 per person this includes one individual ticket to Jeanne Robertson
and a prix fixe dinner menu at Vincent Chicco’s located next door to the Charleston Music Hall.

Dinner reservations required; call Vincent Chicco’s at 843-203-3002 (price does not include tax and gratuity).

Head to the source at youtu.be