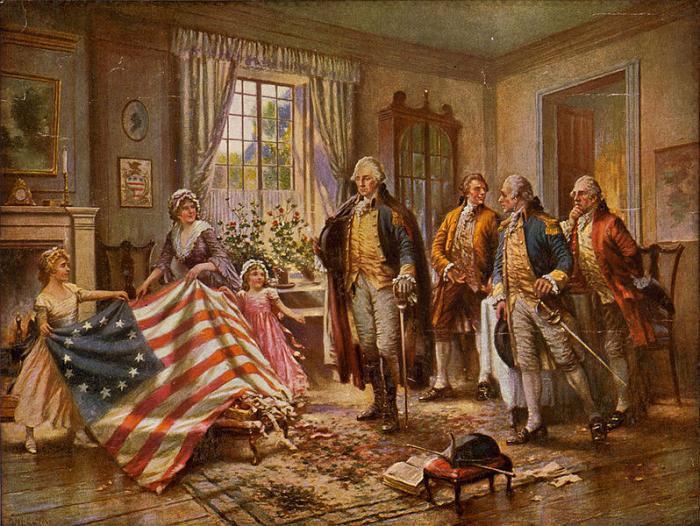 “ We take the stars from heaven, the  red from our mother country, separating it by white stripes, thus showing that we have separated from her, and the white stripes shall go down to posterity representing liberty.” Quote attributed to George Washington

For Americans our flag is the symbol of national unity. It reminds us of our struggle to preserve our freedom, our ideals of justice, freedom of expression and democratic form of government. Many patriots sacrificed their lives to create and keep our liberties. As schoolchildren, we remember standing with our hand over our heart to recite: “I pledge allegiance to the flag of the United States of America and to the Republic for which it stands, one nation under God, indivisible, with liberty and justice for all.” We were touched by Medal of Honor winner, General James Livingston’s, presentation near the Charleston Harbor in 2010 on what the U. S. Flag means to him and other U. S. Veterans.

According to flag historians, flags did not have the same regard in ancient times that they do today. Historically they were used in battle for troop coordination and to distinguish friend from foe. Naval vessels bore flags indicating their country of origin.

During the period before the American Revolutionary War, there were many flags in the colonies. The Liberty Tree Flag had a green pine tree on a white background with the words, “An Appeal to Heaven.” The Son’s of Liberty Flag, of Boston Tea Party fame, contained the thirteen colony stripes. The Continental Navy Flag was 13 stripes and a rattlesnake with the words, “Don’t tread on me.”

The origin of our first national flag, adopted by the Continental Congress on June 14, 1777, is much debated. Historian and author Marc Leepson argues there is no credible historical evidence that Betsy Ross made our first national flag. We were initially indignant on behalf of our founding seamstress but understood when we realized the story of Betsy Ross was not revealed until years after her death. Her grandson, William Canby, related the events in a speech to the Pennsylvania Historical Society. According to Canby, George Washington, Robert Morris and George Ross called on Betsy Ross asking her if she could make their new flag design. She suggested some improvements which included changing the six- pointed star to a five-pointed star and after many paper folds and one snip of the scissors, she presented a five-pointed star. They commissioned her to make the flag.

Three other family members, a daughter, granddaughter and niece, provided sworn affidavits but unfortunately there is no evidence other than family oral history. Oral history is increasingly respected and the Pennsylvania Historical Museum Commission does recognize Ross’s contribution.

Historians point to a flag invoice in 1780 from Francis Hopkinson, a signer of the Declaration of Independence. Congress refused Hopkinson’s request to be compensated for designing the flag. Ross supporter’s counter that Hopkinson was designing flags with six-point stars and that based on his other fees, the flag compensation request was for something elaborate, perhaps a Naval flag. Betsy Ross supporters point out that she was friends with George Washington, attending the same church, and had done seamstress work for him in the past. George Ross was the uncle of her late husband. It was logical that they would turn to Betsy.

Today many historians have used oral history and sworn affidavits to authenticate Betsy Ross as designer and maker of our first national flag. What is certain is the parties involved could not have foreseen the profound significance of the meeting with Betsy Ross or of the newly created flag.  Betsy Ross was proud of her contribution and talked about it often to her family.  We think the position of our Founding Seamstress is secure in the hearts of the American people. Her story has the ring of truth.

Dr. Gordon Mercer is past president and on the Board of Trustees of Pi Gamma Mu International Honor Society and professor emeritus at Western Carolina University. Marcia Gaines Mercer is a published children’s author and columnist. They were married in Charleston and have a place in nearby Garden City.