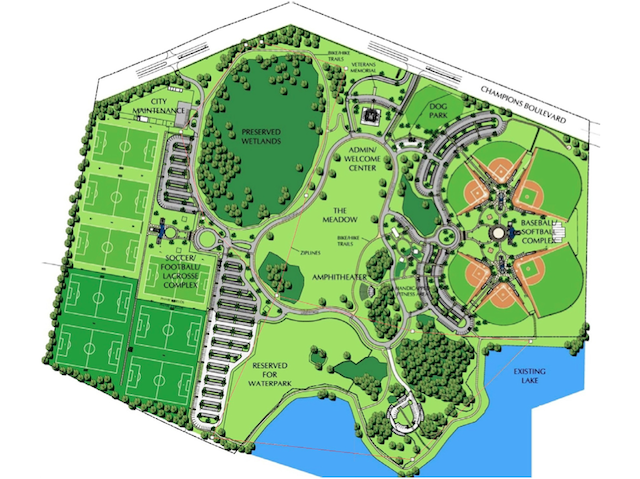 Update November 26, 2012:  While leaders are traveling near and far, scoping out sports tourism opportunities for the new facility to house, work is about to begin on the roads leading into it.

According to the Sun News,

To get to the planned facilities, a four-lane road is being built from S.C. 90 into the park, which is part of more than 1,800 acres annexed into the city west of the Intracoastal Waterway near Robert Edge Parkway and S.C. 31. Plans call for years later to connect the road to Barefoot Resort.

You can read more here.

This past Monday, August 27th the North Myrtle Beach City Council approved the final plans for their sports tourism effort. Construction is expected to begin this November.

a Coastal Carolina University study, which was based on 18 proposed sporting events held at the complex, indicated there would be a $10.5 million direct impact for the first full year with all events running. The community’s indirect impact would be $2.1 million, while the induced impact – dollars spent by those in town for sports tournaments, then going back into the local economy – would be $1.6 million

Hop on over to The Sun News for their full write-up, including info on job creation.

There are a lot of additional aspects to the park like, an amphitheter which can acomidate a 40 person orchestra and more intimatevenues. Also, the space will be home to a 2,300 square foot Veteran’s Plaza which will have five 25-foot flagpoles for the different branches of service, and one 35 foot flagpole for the United States, South Carolina, and POW/MIA flags. And what new local spot wouldn't be complete without a zip line!

(hat tip to Marty Slapnik for the PDF)

Update July 23, 2012: Before construction even starts, additions are being made.  A water park has been tacked on to the master plan.

According to this Sun News article, it will cost approximately $26 million and occupy a five to seven acre piece of land.

Myrtle Waves in Myrtle Beach and Wild, Water, and Wheels in Surfside Beach are the Grand Strand's other water attractions, but both are a considerable distance.  The addition of a water park in North Myrtle Beach is an effort to retain its tourists seeking such an amusement, causing a ripple effect for area businesses.

Update June 18, 2012: In a workshop on Monday, June 23, 2012, the North Myrtle Beach City Council received the final design presentation and awarded the management of the project to Mozingo & Wallace Architects.

According to the overall park development schedule, the City would begin construction bid advertisement and issue bid documents in August. Bid opening would occur in September. Construction would begin in November. The park would open in early 2014. The schedule is subject to change.

NMB Online has some more details on the meeting, including the time frame of what to expect at the complex.

Update May 29, 2012: Work on the the North Myrtle Beach sports park won't start for a few more months, but that hasn't stopped the city from already expanding on the park.

At last Monday, May 28th's City Council meeting, the council authorized the city manager to buy up more land. The City is now buying a 27+ acre lake that is adjacent to the coming sports complex at a cost of $300,000 that will add water features.

Hop on over to North Myrtle Beach Online for the details, including rumors and a look at what the city could be bringing to the sports park with their wet purchase.

Update February 5, 2012: Ground breaking for the new sports park is projected to happen in November of this year with a target grand opening in 2014.

The Sun News has more details on the sports park construction schedule here. This is also the introduction of the "West of the Waterway" road plan put forth by the Grand Strand Area Transportation Study about five years ago (embedded below).

To give perspective on how long these projects take to plan, the ground breaking would happen nearly 18 months since the project became a topic of discussion. See more back-story below.

North Myrtle Beach property owners will be footing the bill through a tax millage increase that is scheduled to stay in effect for several years. The silver lining is that economists are estimating the complex will generate about $15 million per year. Lindsey Theis fills in the details on the WPDE website. Read it here.

The first meeting is tonight, November 7th at 6:00 p.m. in the North Myrtle Beach City Hall. The second meeting and final review will be December 5th at the same time and place. More details about the project can be found on the Myrtle Beach Alternatives site. Read more here.

Update October 6, 2011: (Photos of planning room): We had the opportunity to stop by City Hall in North Myrtle Beach today and snap a few photos.

It's interesting how the architects Mozingo + Wallace presented the options and used what they call "Dotmocracy" to let people prioritize the features they want to see. It's also noteworthy that Mozingo + Wallace also designed the current City Hall and Aquatics Center buildings. Check out the slideshow above or see the set on our Flickr account.

The complex is slated to include sports fields, a water park, an RV park, an amphitheater, and more. Another public meeting is planned to happen next month. WBTW has more details here.

Maybe the September 20th meeting wasn't good enough? At any rate, another meeting has been scheduled for October 3rd from 2:00 p.m.-4:00 p.m. at City Hall for public input on the new North Myrtle Beach sports complex. Some conceptual drawings of the Sports Tourism & General Recreation Park will be presented. WMBF has more details.

The firm has designed local public park projects in the past. There is also a public meeting to allow community members to suggest what amenities they would like to have at the new complex. The meeting is scheduled on September 20th 6 p.m. at City Hall.  North Myrtle Beach Online has the scoop. Read it here.

Update June 21, 2011: (Property tax increase): To pay back the bond the city of North Myrtle Beach issued, council unanimously passed a 6 mill increase and annexation of over 1800 acres of land.

This is the second largest annexation in North Myrtle Beach history, according to spokesman Pat Dowling. Lindsay Theis has the details on WPDE. Read it here. The Sun News also has a write-up. That's over here.

Update June 5, 2011: (Land Bought): The city has agreed to terms for over 144 acres of land from 2 different sellers. The Sun News has the details on the pricing and closing date. Read it here.

First Report: North Myrtle Beach approved a bond this week to begin building a $15 million dollar facility that will include "eight multipurpose sports fields, an amphitheater, a dog park, and a water park"

I personally hope it's coincidence. One of the very negative defining qualities of the Grand Strand is lack of originality in a lot of areas. I'd like give North Myrtle Beach the benefit of the doubt and hope they come up with some unique ideas like they used to have.