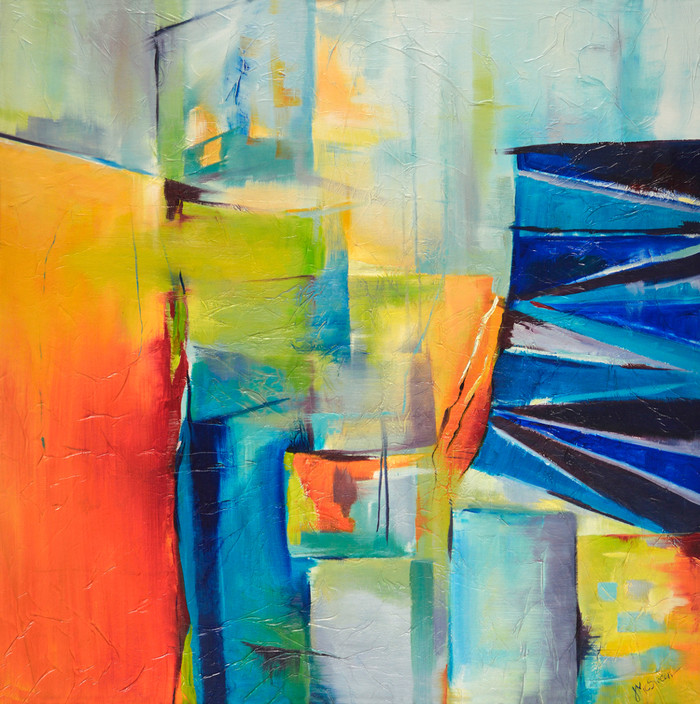 Judy’s design was selected from a total of 60 entries by artists from across the state. The selection was made by a review panel appointed by the Cultural Arts Department who judged the entries based on quality, originality, appeal to festival patrons from a broad range of backgrounds, and ability to convey the spirit of the festival as a public celebration of arts and culture.

According to McSween, Scraping the Sky II evokes the exuberance of a new day and the anticipation of discovery. The piece was created after a summer trip the artist took with her husband, daughter, and nieces, where they explored galleries, parks, and restaurants. “I painted the fresh, inviting view recalling the vibrant city skyline when we embarked,” she explains. “It parallels how I approach a blank canvas - with a simple plan and with excitement to see what I’ll uncover along the way.”

Judy McSween was born in Warren, OH, and earned a BFA with a specialization in painting from Bowling Green State University in Bowling Green, OH. She began her career as an art teacher in Warren, OH, and taught art at a number of private and public schools when she relocated to Myrtle Beach, SC, in the late eighties. Her attention turned from painting and teaching to raising a family of four children after a move to Lexington, SC, in the late nineties. Judy returned to painting full time when her family relocated to Charleston, SC, in 2008.

Judy has participated in numerous regional art shows. She was the featured artist at The Saul Alexander Gallery located in the Charleston County Library in January 2016 and was invited to be an exhibiting member in Charleston’s Piccolo Spoleto Outdoor Artists Exhibit that spring in Marion Square. Her work was selected for the 2010 Piccolo Spoleto Juried Art Exhibit and has been awarded Honorable Mentions in the North Charleston Arts Fest’s Judged Fine Art Competition. Judy’s paintings have also been featured on the cover of the Charleston County Parks and Recreation Program Guide and the 2015 baseball novel, Dreaming .400.

Judy’s paintings are primarily abstract with an emphasis on color and texture. A painting may come to viewers as representative - such as a landscape - and at other times, her paintings are defined by a thought or idea. She currently paints in her home studio and teaches part-time at The Montessori Community School of Charleston. For more information about the artist, or to see her work, visit judymcsween.com.

A new series of McSween’s abstract land and sea inspired scenes will be on display at the North Charleston City Gallery throughout May 2017. The exhibit will also feature the winning piece, Scraping the Sky II. The gallery is located within the Charleston Area Convention Center at 5001 Coliseum Drive in North Charleston. Admission and parking are free. The public is invited to meet the artist at the gallery during the Arts Fest Expo from 11:00am-5:00pm on May 6 & 7, 2017. T-shirts and posters featuring the winning design will be available for purchase.

Head to the source at northcharlestonartsfest.com
Advertisement