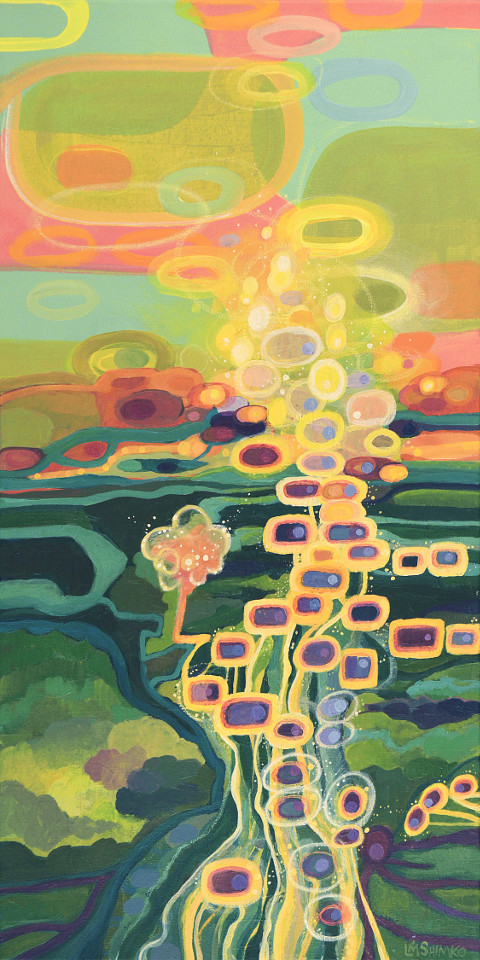 "Air and Water" by Lisa Shimko

Lisa’s design was selected from a total of 64 entries by artists from across the state. The selection was made by a review panel appointed by the Cultural Arts Department who judged the entries based on quality, originality, appeal to festival patrons from a broad range of backgrounds, and ability to convey the spirit of the festival as a public celebration of arts and culture.

According to Shimko, Air and Water and the other paintings in its series are the result of her meditations of the aquatic world. Within the piece she ruminates on “the edges of land to the water, constantly changing with tides; the various organisms, big and small; and accentuating the range of colors found both up close and seen at the landscape’s distance.”  “This painting is not meant to be an illustration of the Lowcountry landscape, but a portal of my experience and feeling of the meandering waterways and the energy of the many creatures that call it home,” she explains. It was this energy that drew members of the review panel to this piece, with many identifying with the concept of how the arts can serve as a portal to feelings and experiences.

Lisa graduated from the University of the Arts in Philadelphia, Pennsylvania, with a BFA in Painting, and a minor in Art Therapy.  Having grown up in York County, Pennsylvania, the colors, forms, and textures of the northeastern landscape, and the simple designs of Pennsylvania German folk art influenced the foundation of her artistic aesthetic.  Upon moving to Hilton Head Island when she finished school, the terrain of the coastal south added new elements to her aesthetic catalogue, and peaked her interest in exploring environmental issues.  After living in Hilton Head for six years, Lisa moved to Charleston in 2006, and has since been extremely involved with the community as a fine artist, instructor, and fundraiser.

Animals and nature are common subjects in Shimko’s paintings.  She uses a visual language focused on new research and old memories, creates symbolism in her works, and allows the elements within them to tell a story. She was selected as the juried image winner for the 2008 Charleston Farmers Market with her piece Tomato Half, and again in 2009 with Watermelon Sky. In 2014 she was commissioned to create the official poster design for the Charleston Food + Wine Festival. She was also featured artist in Charleston Supported Art's Fall 2015 season. Lisa’s work has been exhibited in a number of solo and group shows locally and she is currently represented by Mitchell Hill Gallery in downtown Charleston.

Shimko’s work, including the winning piece, Air and Water, will be on display at the North Charleston City Gallery throughout May 2016. The gallery is located within the Charleston Area Convention Center at 5001 Coliseum Drive in North Charleston. Gallery hours are 9:00am-5:00pm daily and admission and parking are free. The public is invited to meet the artist at the gallery during the festival’s Premiere Weekend on April 30 and May 1. T-shirts and posters featuring the winning design will be available for sale.

Head to the source at northcharlestonartsfest.com
Advertisement