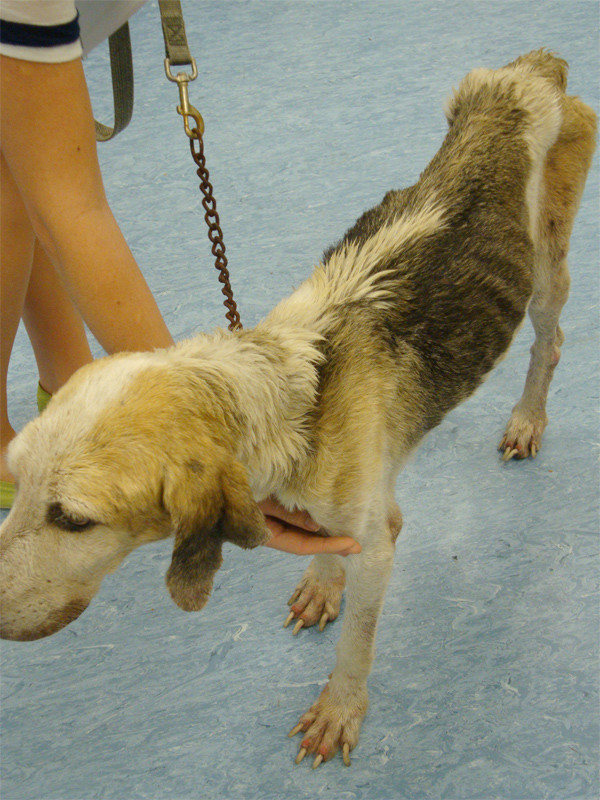 Update October 6: The Post and Courier is reporting that following the discovery of cancer in Holly the decision was made that it was best to euthanize her; get their surrounding story over here.

First reporting, September 29: Passing along this sad story of a malnourished dog found on James Island and helping to spread word in effort of find any owner.

A severely malnourished dog was found on James Island early this afternoon, September 29, 2010.  As Pet Helpers Operations Manager Kristin Kifer noted, “It’s the worst case of animal neglect,” that she’s seen in her three years on the job.  It is apparent that the dog has been outside during the torrential downpour of the past few days, and was obviously without food or care for many weeks before that.  A good Samaritan saw the dog today, picked it up, and brought the female hound mix to Pet Helpers.

Her age can only be estimated at anywhere from five to eight years, as the decay and lack of teeth make her age difficult to decipher.  Her hips, shoulders, and ribs protrude through her skin.  She has bed sores on her hips and other joints, evidence of many days spent without food or proper care.  Her nails have grown so long that they cross, and her nail beds are irritated and inflamed as a result.  It is obvious that she has had litter upon litter of puppies, before she was probably cast away for lack of utility.

Amazingly, Holly, as the staff at Pet Helpers has named her, walks well and without pain.  She is currently resting comfortably on a soft dog bed, amongst heating pads and blankets.  She will be fostered until she is deemed healthy enough for adoption.

Pet Helpers greatly appreciates any donations received in an effort to offset the costs of care that will accrue in the effort to bring Holly to good health.

Anyone with information related to this case of animal neglect is urged to call Kristin Kifer, Operations Manager at Pet Helpers, at 843.795.1110.