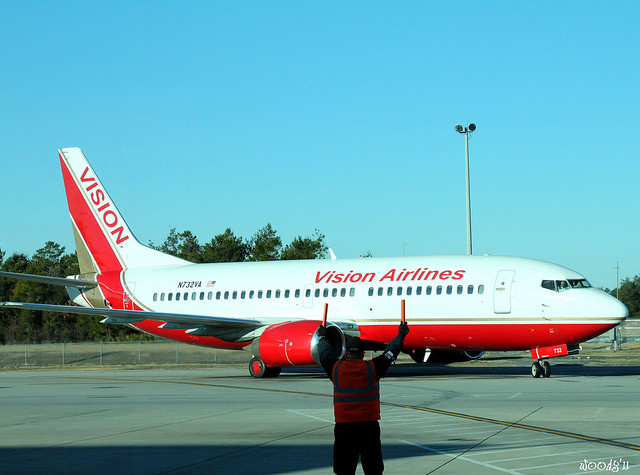 Update June 22, 2012:  WMBF reports that there have been bumps along the road to MYR for Vision Airlines.

Customers have experienced delayed and cancelled flights with little communication from Vision and the Better Business Bureau's file of complaints also cites non-responsiveness by the company.  It's not fair to judge an entire operation on a few experiences, but it's hard to ignore them, as well.

First report:  Myrtle Beach International Airport is about to get a bit busier with the addition of eight new direct flights from locations in the Midwest and east, courtesy of Vision Airlines.

Service will begin on May 31, 2012 and is scheduled to continue through October 31, 2012.  The new non-stop routes will be between Myrtle Beach and Cincinnati, Cleveland, Toledo, and Columbus, Ohio; Indianapolis; Louisville; Nashville; and Springfield, Ill. The company's site lists a ninth destination, not included in the press release, to and from Clarksburg, WV.

Vision Airlines was founded in 1994 and focuses on business and destination locations.  It currently flies in and out of 19 airports, all in the continental US with the one exception being a stop on Grand Bahama Island.  For its Myrtle Beach flights, it boasts Boeing 737 jets, providing passengers with more room than smaller regional jets. Stop rolling your eyes, people.  More more is more room.  Every inch between you and your smelly neighbor or new reclining BFF counts while flying the friendly skies.

You can see the full press release over at the Sun News.