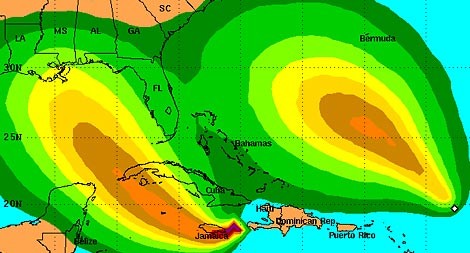 5:52 am on Thursday August 28, 2008 | Posted by Ken Hawkins
Most of Southeast at risk for tropical storm-force winds

The new tropical depression is expected to bend our way (but there's no knowing for sure).

Here's what the National Weather Service has to say about the storm:
The depression will likely become a tropical storm later today and could reach hurricane intensity in 3 days. [Some forecasts] are more aggressive...predicting an intense hurricane.

... this pattern should force the cyclone to take a more west-northwest track in a day or so. the flow around an upper-low just north of Puerto Rico could also induce some westward component over the next few days.

But one model says the storm could simply curve back out into the Atlantic and ignore us altogether.

Follow the forecast at The National Weather Service and The Weather Underground.

As usual, we'll keep you posted.