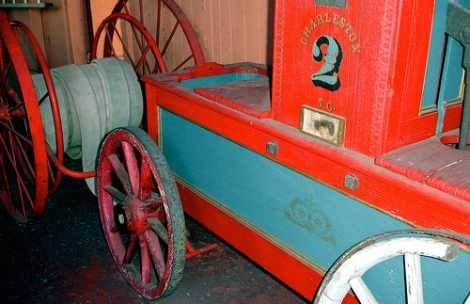 Image by Flickr user grittycitygirlImage by 20080809fire.jpg Luckily, firefighting technology has improved, so the new recruits won't have to use this.

The first new firefighters under the city's revamped department leadership and training efforts took their oaths Friday, as the Charleston Fire Department graduated 19 new members. The training course, which lasted two weeks, was updated in the wake of the Sofa Super Store fire to promote better safety.

The graduating class was one of the largest in the history of the Charleston Fire Department, and it was the first led by Battalion Chief Jimmy Ghi. Ghi was appointed to head the department's training division after an independent review panel called for more realistic training and higher education requirements for city firefighters.

Two weeks of training in the most intense heat of summer and still, spirits are high. "The heart everybody shows, the emotions we all put out there, it just ties us all together," said Tom Leslie, one of the new fire fighters.

ABC News 4 also has video for you.