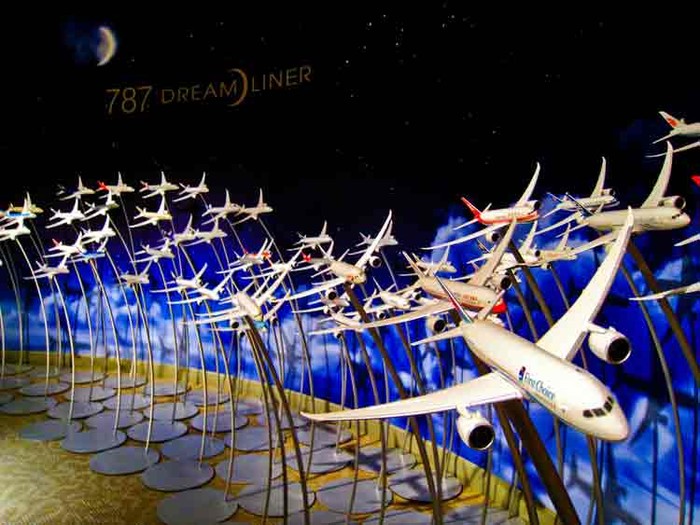 Image by Flickr user 1yen.Image by dreamliners.jpg Each of these Dreamliner models has been decorated with the markings of an airline that's placed an order for the real thing.

The Post and Courier delivers its second day of all-hands-on-deck coverage of the Boeing decision with a package of "Now What?" stories and photos.

But the best stories in the package are probably the ones that didn't make the front. The interview with Keith Summey gives a peek inside the way the city handled the process, and a Warren Wise article in the Business section talks about a new manufacturer that celebrated the opening of its state-of-the-art Daniel Island facility at the exact moment the Boeing deal was announced. D'OH!

(The P&C also has a Boeing page where you can check what they've written on the topic. It's kinda similar to ours, except you don't see what else others have contributed. )

The Charleston Regional Business Journal pitches in a piece on statewide impact, and The State has a piece on job prospects.

This Charleston City Paper story does a good job of putting the new plant into the context of Boeing's existing operations in North Charleston.

Tim Coyle, Boeing's local executive in charge of the 787 project, says the company will break ground on a new 576,000-square-foot facility next month, with construction slated to begin in mid-2011. The first 787 will fly out of Charleston International Airport in early 2012, he said, with planes following at a rate of three a month.

In addition to serving as a location for final assembly of 787 Dreamliners, the facility also will have the capability to support the testing and delivery of the airplanes."

Currently about 2,600 workers work for Boeing in North Charleston, including 100 that support the U.S. Air Force's C-17 program.

The remainder, a mixture of full-time, part-time, and contract employees, work at the plant Boeing purchased in July from Vought Aircraft Industries or at Global Aeronautica, a joint venture between Boeing and Alenia Aeronautica, of Italy.