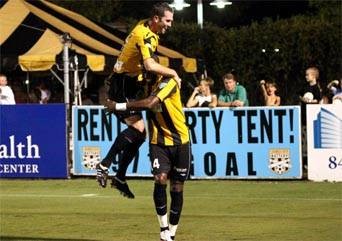 The Charleston Battery defeated the Charlotte Eagles 3-0 Saturday night, August 14, at Blackbaud Stadium to win the USL-2 regular season title in front of 4,751.

Live 5 News was at last night's game and has some nice video clips; watch that here.

Lamar Neagle opened the scoring in the 37th minute with a superb piece of individual skill.  Neagle dribbled into the box, cut to the left of the keeper then pulled the ball back onto his right foot before blasting home. It was Neagle’s team and league leading 12th goal of the season.

Charleston doubled its lead in the 44th minute after midfielder Mike Zaher slipped the ball through to Tom Heinemann on the left side of the box.  Heinemann held off his defender and then curled a shot around Charlotte goalkeeper Erik Lefebvre and into the bottom right corner.

The Battery continued to create chances after the break but scored the third goal in bizarre fashion after Charlotte conceded an indirect free-kick in the box as Lefebvre picked up a pass from one of his defenders.

The free-kick was taken from the six yard line; Ian Fuller tapped the ball to Rudolph Mayard who buried his shot with a powerful left-footed strike that cannoned in off the defensive wall.

The Battery will have an extra week to prepare for the Championship game as they receive a bye into the final.  The Richmond Kickers host the Pittsburgh Riverhounds in the USL semifinal next Saturday night at U of R Stadium.  The will be the Battery’s first USL Championship match since 2003 when Charleston defeated the Minnesota Thunder 3-0.

Tickets for the USl-2 Championship game will go on sale at 9 AM Monday morning starting at just $109 with discounts for groups of ten or more.  To purchase tickets call (843) 971-GOAL (4625) or visit www.charlestonbattery.com.