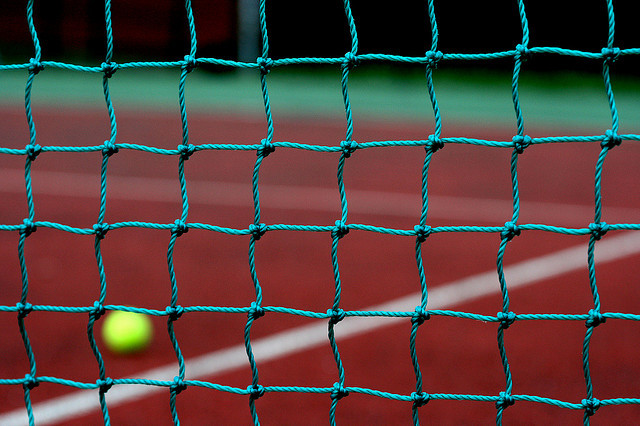 Image by Flickr user DaveMontPhotography At then end of construction — expected in September — there will be five clay courts at the public tennis complex.

Update October 17: The reconstruction is complete and the courts will be re-opened with a ribbon cutting on Friday, October 19.

Mayor Joe Riley along with members of Charleston City Council and the Charleston Parks Conservancy will officially open the courts at 6 p.m. on Friday.

The renovations began on June 4, 2012 and are anticipated to be completed in September. The tennis courts are not open during the construction. Maybank clay court members can play at the Kiawah Island courts in the afternoons and at the Family Circle Cup on weekend afternoons. Hard court members are playing matches at the Alan Fleming Tennis Complex in Johns Island Park. The total cost of both the original scope and added clay courts is $783,224. The contractor is MAR Construction.

The Maybank Tennis Center has 415 people who pay the annual fee and use the facility regularly. Other residents and visitors pay an hourly fee.

The Maybank Tennis Center has been one of the host sites for numerous State League Tennis Tournaments as well as the Charleston County School District Superintendent's Cup.

The Maybank Tennis Center offers lessons for both adults and children. Tennis Pro Toni Young and her staff have a large following of children and have taught many adults to play the game of a lifetime in their beginner and intermediate clinics.

The Maybank Tennis Center has teams in the USTA Leagues including Adult, Senior, Mixed Doubles, Combo Doubles, Singles League and Flex League. They also have a number of teams in the Tuesday morning CALTA (Charleston Area Ladies Tennis Association) League.

The Maybank Tennis Center offers the only public clay tennis courts in the downtown, James Island and West Ashley areas.

The facility will be open 7 days a week and in addition to the courts, there is a ball machine for members and a hitting wall for practice sessions. The club house has a small pro shop, restrooms and showers. Maybank Tennis Center averages 50 adult lessons per month and 94 lessons/clinics for children per month.