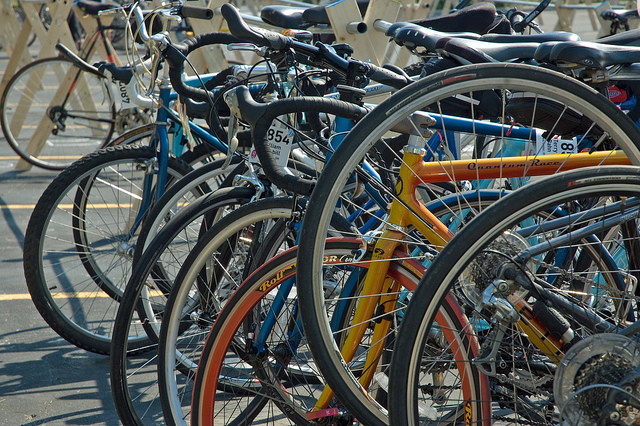 There is an update to this story

The City of Charleston is installing what is likely South Carolina's first bike corral on King Street next week.

The row of fixtures to which bikes can be locked is an increasingly common site across the U.S. on city streets.

The local corral is being installed in the block between John Street and Hutson Street — just north of Marion Square — and wil have ten bike parking setups.

Worth noting, in 2010 a movement within City of Charleston leadership to crack down on the locking of bicycles to trees, fences, light poles, and the like was rebuffed after detractors noted a lack of "official" places to lock bikes.

Here is more information about the locks from a city release:

While bicycle parking is nothing new, providing safe, convenient and secure parking in the form of bike corrals is new and growing in popularity. Cities such as Savannah and Raleigh have recently installed bike corrals and other cities in South Carolina are planning to install them soon. Charleston's large and growing population of bicyclists makes it the perfect place to pioneer these new bicycle facilities in our state.

Three other corrals are planned for the downtown area: one at King and Hasell Streets, one on upper St. Philip Street and one on Concord Street near Waterfront Park. The new corrals are part of an overall effort by the City to meet increasing demand for bicycle parking in the downtown area. The corrals are an innovative solution to the challenges of Charleston's historic streets where sidewalk space is already heavily utilized by pedestrians and other streetscape elements.

Mayor Joseph P. Riley, Jr. sees the new bike corrals benefiting the City of Charleston Streets in many ways. "Bike corrals not only serve the customers of businesses on the greatest shopping and dining streets in the country, they serve as a signal to everyone that bicycling is an important part of our community. Promoting bicycling downtown and in other parts of the City helps address the problems associated with congested areas."

Jonathan Sanchez, owner of Blue Bicycle Books on King Street, agrees with Mayor Riley. The first King Street corral is directly in front of his bookstore. Sanchez remarks, "It's amazing to think how much impact this could have on Upper King Street. So many more people are riding bikes to work now, and to go out in the evenings. Turning one metered space into a bike corral isn't just a ten-for-one trade in terms of vehicles -- it's really a feather in the cap for Upper King Street. It's a cool amenity like the bluestone and palm trees."

The Rarebit's copper mugs being pilfered