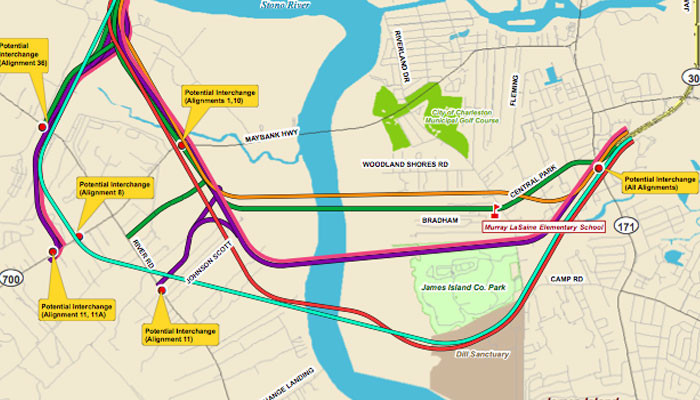 Update May 6: The Post and Courier went to Tuesday's meeting and writes about the relatively mild response of people thus far. Go read about the meeting.

I suspect many of the passionate have already made up their minds about if they want any form of interstate, regardless of the route.

There is still one more public meeting on Thursday; details below.

The Post and Courier has done a good job of distilling the options in this story and graphic.

It seems some of the more exotic alternatives won't yet be presented, and only interstate-like roads will be shown. If that does happen I suspect the DOT will get a less than enthusiastic response from the community as the problem was not so much with the route but the type of road.

Still, to judge the plan before hearing the pitch would seem unfair.

If you'd like a peek at some of those more "exotic" ideas, check out this 22-page PDF from the S.C. DOT.

Read more stories on this subject in our I-526 topic page.

Here's a bit about the meetings from a press release:

Three meetings will be offered in an “open house” format. Interested persons may attend any of these informal informational meetings at any time between 6:00 p.m. and 8:00 p.m.

Project team representatives will be available at these meetings to answer questions regarding the proposed project. Attendees will have the opportunity to make written and verbal comments at that time. Written comments may be submitted to SCDOT until June 5, 2009.