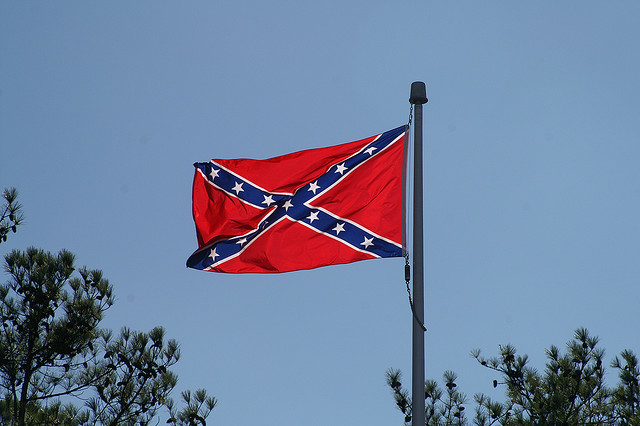 3:11 am on Tuesday September 27, 2011 | Posted by Ken Hawkins
In historically black Summerville neighborhood, a Confederate flag causes a stir (Updated)

Update September 27: The Associated Press dropped by Summerville for a checkin a year after the march against Caddell's Civil War flag display.

As you might guess, little has changed — aside from a higher flag poll to escape the 8-foot high fences erected to block the view.

Update February 26, walls: The community has proved unable to get Annie Chambers Caddell to remove her Confederate flags, but her black neighbors have proved able to erect a fence the reaches eight feet and blocks many views of the flags.

The Post and Courier has a story and photos of the odd tale; read it here.

In a similar report to The Post and Courier's, NBC News 2 has a video interview with Caddell. In that video News 2 gives an overview of the situation, multiple views of the flag and the wall, and chats with Caddell about her perspective; watch the video here.

Update October 17, 2010, rally: On Saturday the Brownsville community held a protest against they flying of the flag -- about 70 people marched while a couple dozen were on hand to side with the flying the flag.

First reporting, October 1: In the historically black neighborhood of Brownsville in Summerville there's a new neighbor that's proved fond of displaying confederate memorabilia, including a confederate flag, and that's caused chafing between the home owners and the many local residents that say its a public display of racism and hatred.

Live 5 News has a nice video report that chats with one of the homeowners and one of the upset longtime residents, while The Post and Courier has a quicker but more recent report which says the town won't intervene.