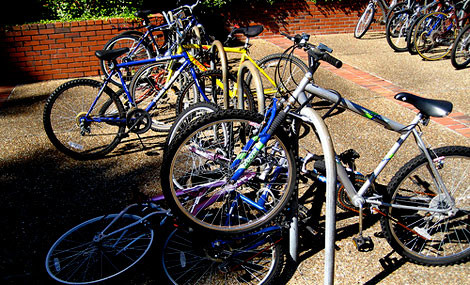 If you live near the College of Charleston you're used to thought of bicycle overload, but at USC in Columbia it's a different story: The number of students cycling to class there has skyrocketed, particularly after infrastructure changes in 2002.

Now in 2008 it's hard to find a place to lock up a bike, even after 80 bike racks were added in the last three years.

The State talks a bit about it:
Geology professor Alicia Wilson, another member of the early USCycle group, is delighted to run into other cyclists on her daily commute to her office.

“This fall I’ve seen just a huge increase,” Wilson said. “I think it has something to do with gas prices.

I've always believed that bikes are far more convenient than cars in urban places, and it's great to see USC becoming more encouraging of the idea.

Go read all about it at The State.

In related news: Columbia was recently honored with a bronze award for being one of 96 Bike Friendly Communities in the country -- and, no, Charleston is not on the list.