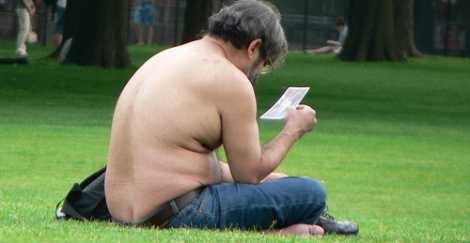 Image by Flickr user ljvImage by 20080813butt.jpg Nobody likes indecent exposure, but is the answer a ban on baggy pants? And, more than that, can Charleston succeed where Jasper County failed?

Original post: Apparently some members of Charleston City Council have been talking to Jasper County officials, and they've decided they don't want boxers (or briefs) showing on the street. And although the Jasper County attempt failed, local councilmen Wendell Gilliard and James Lewis are now starting an effort to end what they call indecent exposure.

NBC News 2 has the story:

He says men should be held to the same standard.

News 2 also has more on Gilliard's argument in favor of the low-pants ban. So far, the details haven't been worked out, the news station says, but focuses on any exposure of underwear or "genitalia." Gilliard apparently tried to pass a similar law a few years ago, but didn't get anywhere. The issue is on the agenda for the council meeting on Tuesday, August 19, at 5 p.m.

Live 5 News also has coverage on the issue, along with video. Here's what they had to write:

Councilman Gilliard is a co-sponsor of the ordinance and he says the look is also connected to crime, saying gang members and drug dealers sport the look.

"If you're going to dress like that you might as well just go to a zoo," JJ Gutierrez said.

Update August 15: ABC News 4 has a story that says State Senator Robert Ford is working on legislation that could make it a statewide ban.
“It was rough being African-American in this country. I’ve been to jail 73 times fighting for civil rights to make life better for them and they’ve brought us back one-hundred years. We’re acting like we just came out of slavery. That’s the way they look and they don’t have enough sense to know it. Pull the pants up and be a real man,” Ford says.