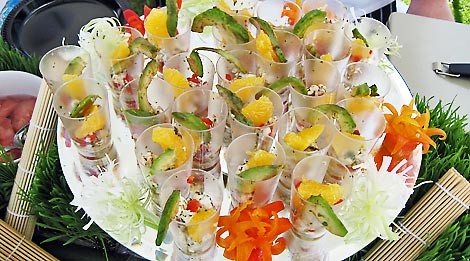 The Shrimpin' & Shaggin' festival, Sunday, September 14, enthused visitors from every corner of the Lowcountry who came to enjoy shrimp, song and scenery.
Set on the harbor, the festival offered a plethora of dishes and drinks relished by the sweaty guests. Firefly Sweet Tea Vodka was a cocktail favorite at the beverage booth while hungry visitors ate a variety of shrimp-centered dishes like: shrimp n’ grits, shrimp tacos, and pickled shrimp gazpacho.

Aside from the delicious food and drink, the festival provided ample entertainment. “The Tams,” one of the best “shag bands” in the South, played for the third year in a row and roused their shrimp-hungry audience.

Hosted by the maritime center, the Shrimpin' & Shaggin' festival celebrated its third annual event on Sunday. The festival is put on by NACE (national association of catering executives) who donates all of the money collected from the $10 admission fee. The money is contributed to several charities including NACE scholarships for culinary students and the South Carolina Shrimper’s Association, which promotes local shrimping.