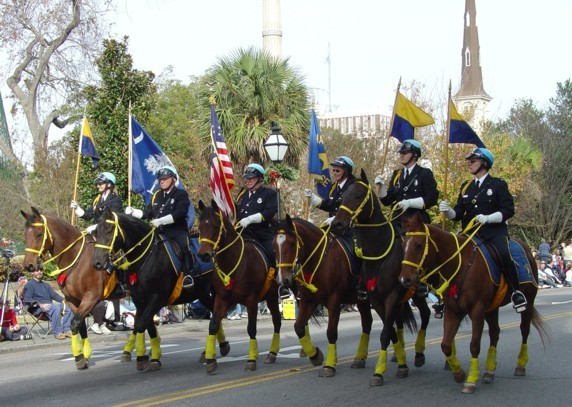 Image by City of Charleston The Mounted Patrol in the Charleston Christmas Parade.

Update February 22: The Charleston Mounted Patrol unit has officially been shut down and is reported to save the city about $125,000 this year and save even more in the future.

The Post and Courier has an update on the closure of the Hampton Park horse barn, a bit on the retired horses and additional history on the unit which has been around since 1978; read it here.

Update February 15, profile: The New York Times has published a profile about how mounted police units across the nation are often the first to see the budgetary axe.

And Charleston's recent move to cut it's relatively small unit of six horses has earned top billing in the feature; read it here.

Update November 27, support of cut: The Post and Courier has written an editorial outlining why they support the idea to trim the patrol (even if they'll shed a tear); take a read here.

Update November 24: Things aren't looking good for the unit: the proposed budget that slashes their funding is moving forward.

The Post and Courier has a report on the history of the unit and its possible elimination to trim the force's budget; take a read here.

The paper also has details on Tuesday's meeting where the item is to be discussed.

Update November 23: Live 5 News has a companion report on the possible horse trimming and ABC News 4 has a nice video report.