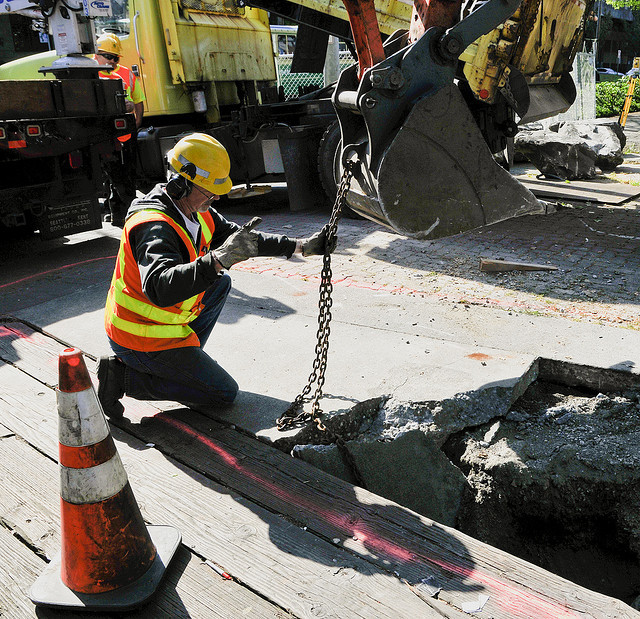 11:28 am on Tuesday November 20, 2012 | Posted by Paul Reynolds
Sinkholes in Georgetown not a surprise (Update: one year later)

Flicker user Washington State D.O.T.
WSDOT Crews repair a sinkhole similar to the ones in Georgetown.

Update November 21, 2012: A year has gone by and not much more is known about the sinkholes in Georgetown.

The UPS store has reopened down the street and the Bank of America branch is still operating out of a mobile unit in their parking lot. WBTW did a story which has more information and raises the concern that the problem could be farther reaching than realized.

Update December 30, 2011: This story keeps getting deeper and deeper...

The cause of the sinkholes in Georgetown are still a mystery. With a handful of business affected and a lot of finger pointing there are still no answers to be had.

Hop on over to The Sun News for their update.

Read below for all the back story.

Update, December 9, 2011:  The fun is not over yet.  Another business, Landy's Cleaners, is closing its doors, stating that their building is no longer safe as a result of the sinkhole issue.

You can read the full write-up in this WPDE report.

The debate seems to revolve around who hired the contractors to manage and work on the project. The Georgetown Times gets into the details, including documentation of who hired whom. Read that here. The Bank of America building that was supposed to be temporarily closed has been deemed unsafe if the drainage project continued to operate. Details are here.

WPDE also has a story that says the state insurance board that would potentially cover any claims against the DOT is investigating the cause. See the video below and read more here.

Even though all of the damage found so far has been within a two block radius of the DOT drainage project site, the DOT has not accepted responsibility in the sinkhole and property damage. The Sun News has more details on the property claims and the back story. Read it here.

The DOT still isn't accepting blame for the sinkholes but they are hiring a third party to test and analyze the ground to possibly determine the cause and develop a solution. The unsettled ground is a very big problem causing numerous buildings and businesses to close. WPDE has more in their video below and The Sun News has a detailed write-up as well.

First Report: Late Thursday night, a sinkhole developed large enough to take out a building and cause the main thoroughfare between Myrtle Beach and Charleston to be shutdown. Georgetown has been aware of the sinkholes for several weeks.

About a month ago a small sinkhole appeared in the parking lot of the Parrish Place building. An owner of the neighboring gas station knew something was going wrong when cracks appeared on his lot and his door wasn't operating properly. The large sinkhole on Thursday night was a new one that developed quickly. Locals are concerned about the town's water tower that is located nearby.  The Georgetown Times has a detailed report on the businesses affected and citizens' concerns. Read that here.

Since then, several other buildings in the area have been closed. The S.C. DOT hasn't officially taken the blame but they did suspend their US 17 drainage project on Friday and state lawmakers want to determine the cause. WPDE has more coverage including when the building first collapsed. WMBF has reported that the roads have been re-opened but there's still congestion and inconveniences when driving through. See that here.