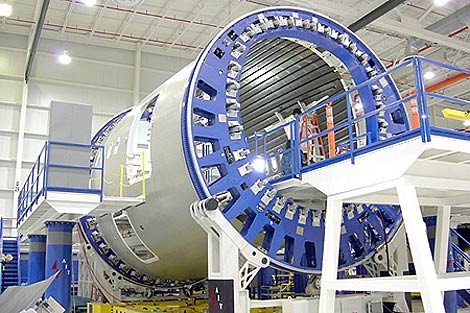 7:00 am on Thursday June 12, 2008 | Posted by Ken Hawkins
Local Boeing woes thanks to complicated supply chain

Image by VoughtImage by 20080612vought.jpg An aft fuselage for a 787 is seen partly completed at Vought's North Charleston facility. The 787's production has been a global race to get parts completed on time.

Construction of the highly praised 787 Dreamliner has been complicated at best: Parts are built all over the world then shipped around the world until at last the supply change completes in Everett, Washington.

Charleston's Vought Aircraft Industries has been a crucial player in that line, as they assemble most of the rear fuselage of the 787. But the company has had troubles in the past getting the fuselage delivered, and Vought blames it on slow delivery of parts from other members of the 787 supply chain.

Yesterday, Vought announced it was pulling out of one of its deals with Boeing as Vought did not have control over its supply of parts to build the rear fuselage. The Seattle Times quotes Vought Chief Executive Elmer Doty:
"A year ago, definitely we were at the back of the pack. We've moved to the middle of the pack, and we're moving up. The thing about this race is, it only counts when everyone gets across the finish line."

In April, Boeing pushed back the 787's commercial launch by six months, to the third quarter of 2009.