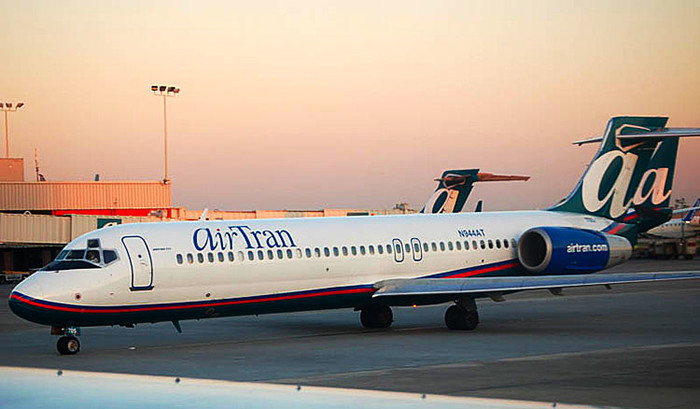 It's been confirmed that the airline is leaving Charleston. The Post and Courier has a few details.

The Charleston Metro Chamber of Commerce confirmed it for them. -- Who we called early today, but they didn't call us back.

It sounds like the airline is leaving Charleston for many of the same reasons as they left Savannah.

Update part 2: We spoke with an AirTran representative who told us much the same thing that The Post and Courier heard from the chamber: While the airline enjoyed good relations with Charleston, ultimately the fuel price spike and drop in business fliers took a toll on the performance of the Charleston operation.

She noted that they were still enjoying good leisure flight volume to Charleston, but that it wasn't enough.

We're waiting on a call back from their corporate communications, but it looks like something is up with AirTran in Charleston.

Read more stories on this subject in our AirTran topic page.Twitter user @SeanHughes pointed out that AirTran is not booking flights out of Charleston, and said that a phone operator told him the reason is "because they are shutting down Charleston" and not booking flights after December 1.

While we haven't been able to verify if they are in fact shutting down, a quick search on the Web site verifies that they are not currently booking flights after December from Charleston (though we were able to find flights through December 4.)

If the information from the phone operator is accurate, a lack of an official statement would suggest that a final decision on AirTran's future in Charleston may not have been made.

We'll be sure to update once we get more information.

If AIrTran does leave, it would mark a short two-and-a-half year stay in Charleston, and come just eight months after the company said it planned to stay put.

The move would also disappoint many who see the presence of the low-cost airline as a stabilizing force in Charleston airfare prices.

It's also been just about a year since AirTran left Savannah.