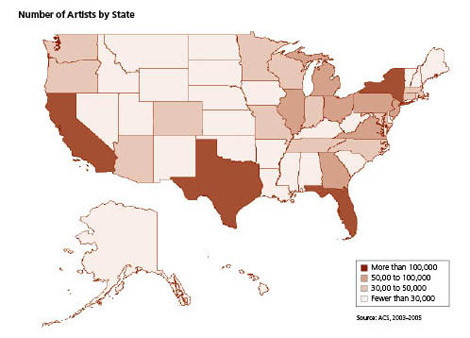 Image by National Endowment for the ArtsImage by artists.jpg An NEA graphic shows proportions of artists in the work force across the U.S. The map shows a very small proportion of artists for South Carolina, as you can see, with hot spots in California, Florida, New York, and Texas.

A new study by the National Endowment for the Arts (read the full report here) analyzes employment patterns among artists. In South Carolina, according the the data, there are 19,118 artists, making up 0.94 percent of the civilian labor force, which puts the state on the low end of the scale. It's far less than average (1.38 percent), to say the least.

The NEA study did point out, however, that South Carolina ranked tenth in growth of artistic jobs between 2000 and 2003-05, with a 20 percent jump. So we're definitely getting there, and with some pretty huge strides, it looks like. Local and state art officials also report seeing this growth, as well as growing interest in the arts among the general population.

Also, some good news for Charlestonians is that the Holy City is something of a bright spot on the question of creative jobs in South Carolina. There's a large segment of architects and designers, which boosts the overall artist population, though even Charleston falls below the U.S. average of 1.38 percent.

Charleston is relatively fertile ground for the creative process. Some 3,115 Holy City residents, or 1.2 percent of the workforce, make a living creatively. Their ranks are bolstered by 1,090 designers and almost 500 architects.

There are more artists in Charleston than in Asheville, Columbia, Myrtle Beach or Savannah, though on a per-capita basis Asheville and Wilmington are two of the country's most creative cities.