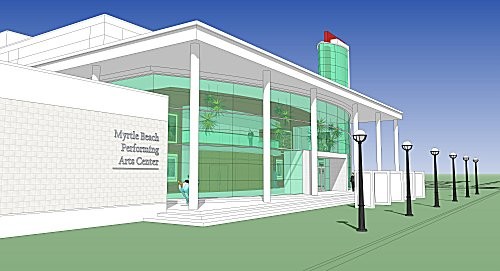 6:58 am on Thursday September 27, 2012
Performing arts center in our future? (Update: Tax hike being considered)

Rendering of the proposed arts center.

Update September 27th: It isn't clear which direction this project will take. There is talk of a tax increase to pay for the performing arts center.

The Sun News reports that the Myrtle Beach City Council met and is at odds about moving forward, and how to proceed if they do.  It's been suggested that the residents of Myrtle Beach get the opportunity to vote on whether or not they'd agree to a tax hike to fund the project.  Others scoff at the length of time putting together and executing a special election will take.  Another fact is the associated cost.

We're speculating that construction will, unfortunately, not begin any time soon.

Update August 24th: The City is considering hiring a project management firm to handle both the construction of a new performing arts center and expansion of the convention center. Council members don't all agree this is a good next step.

Hiring a project management firm, through a formal proposal process, has the possibility of alleviating the need for a tax hike to fund the projects.  Council members were concerned about handing construction of the performing arts center over to a third party, but felt more comfortable when the two projects were combined.

Update July 12th: The public meeting was standing room only as both residents for and against the City getting involved with the Performing Arts Center project.

It sounds like the overall opinion was evenly divided. The Sun News gives a good feel for how the meeting went. Read it here. WMBF also has some coverage. That's here.

Update July 7th: Sounds like there is some confusion about the project on the City side of things.

To clear the confusion and get an idea of community support on an idea, a public meeting has been called by the City of Myrtle Beach. If you have an interest in the project, there's a public meeting at the Myrtle Beach Convention Center rooms 206 & 208 on Monday, July 11th at 6 p.m.

The Sun News has more details about the confusion including some back story on the Rivoli Theater project. Read it all here.

First Report: The city want's to know if Myrtle Beach has enough performing arts groups in the area for a $10 million dollar arts center.

But, more importantly, they want to know if city residents want to foot an additional $3 million dollars in property taxes to get the center built. This past tuesday, June 28 the city council members began discussing whether to hold a special election this February "with an advisory referendum asking residents whether they support the tax increase and expenditure."

Pop on over to The Sun News to read the whole story about this proposed arts center that's been talked about for more than a decade.

Moreover, in The Sun News' comments section for this story there is a lively discussion going on about whether Myrtle Beach would be receptive and or the right place for this type of entertainment.