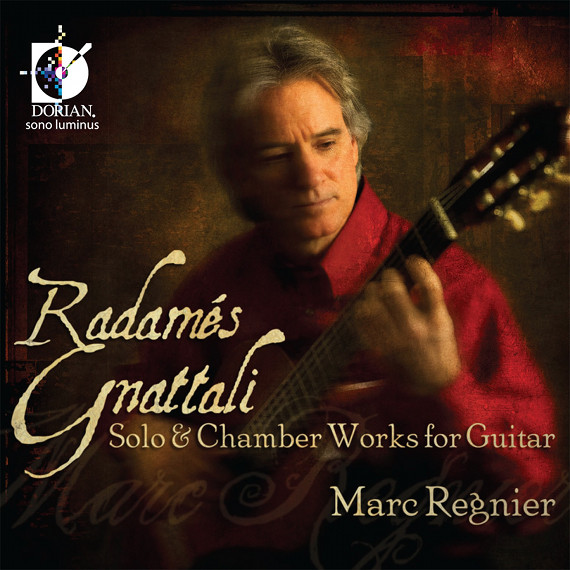 Image by College of Charleston

Internationally recognized classical guitarist and College of Charleston associate professor Marc Regnier has been nominated for a Grammy.

His most recent recording of the chamber and solo works of Brazilian composer Radames Gnattali (Dorian/Sono Luminus), was selected for the Best Chamber Performance category. Winners of the 53rd annual Grammy Awards will be announced on February 13th.

“On the night of the Grammy nomination announcements, I received a call around midnight, which to me only meant one thing,” Regnier says, as he describes his excitement. “My producers, Marina and Victor Ledin, verified that indeed, we had been nominated for a Grammy in one of the toughest categories, and in a year when The Recording Academy received more Grammy entries than ever before. Many of the multi-Grammy award-winning ‘stars’ had entries this year. I felt we had a good product, but to compete with these musicians…not in my wildest dreams! Our conversation ended with, ‘See you in Los Angeles in February!’”

Regnier has won the attention and respect of critics, producers and musicians for more than three decades as a performer, recording artist and educator. He has performed the works of Radames Gnattali for many years and wanted to dedicate an entire CD to the Brazilian maestro’s works. Regnier explains, “I discovered that there were very few recordings that devoted an entire CD to Gnattali’s works, and I knew it had to be a chamber recording due to the fact that this genre in the recording industry has been on the upswing for quite some time.” In the recording, Marc Regnier is joined by fellow faculty members Tacy Edwards (flutist) and Natalia Khoma (cellist), and by Marco Sartor, Regnier's former guitar student. “They are the very best musicians that one could find anywhere to work with,” he adds.

The CD was recorded at Skywalker Sound. Leslie Ann Jones, a Grammy award-winning engineer, and Marina and Victor Ledin, who were nominated four times for a Grammy in the Classical Record Producer of the Year category, worked on the project. Regnier says, “Ms. Jones and the Ledins, who have access to some of the world’s best musicians, were very impressed with the College of Charleston team.”

This is the second recording that Regnier has made with the Ledins. The first was a recording by Marco Polo (Naxos) featuring the works of Alexandre Tansman. Regnier has also recorded works by David Maves, an American composer and College of Charleston Professor Emeritus. Regnier and the College of Charleston team that performed on the Gnattali CD are currently planning several more recording projects with the Ledins.

Regnier adds, “I wish to thank the College of Charleston for its support. I am very proud to be a faculty member and to be surrounded by so many talented people!”