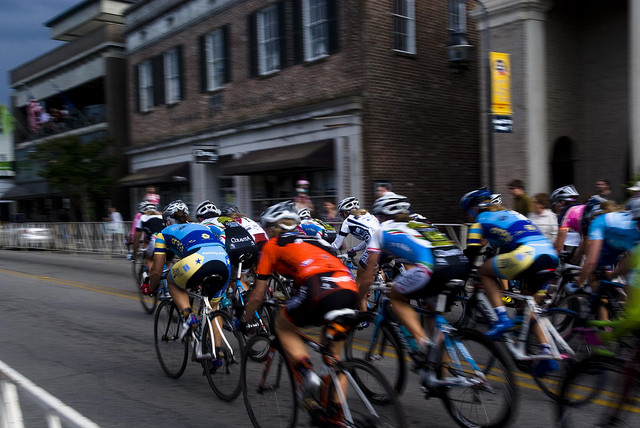 Image by TheDigitel It's a mad dash to get on the list.

Charleston is joining 158 communities in 48 states to be awarded the designation of "Bicycle Friendly Community" by the League of American Bicyclists.

Our city is one of 18 communities added in 2010 and enters at the lowest level, bronze, a ranking shared by other South Carolina cities Greenville, Columbia, and Spartanburg. Still there is no doubt that Charleston's efforts are being looked on favorably as last year the city received only an honorable mention.

Still, the city was recognized in April by Bicycle Magazine as the nation's 29th most bicycle friendly community.

Regardless of which metric you find to be more true, Charleston's cycling community is on the up and up.

The full announcement is below for you masochists.

The City of Charleston has been awarded the designation of Bicycle Friendly Community by the League of American Bicyclists.  Announced on Friday, September 10, The Bicycle Friendly Community (BFC) program is an awards program which recognizes communities around the country that actively support bicycling and are committed to improving public health and quality of life while protecting the environment and providing better transportation choices.

Charleston received the Bronze level award and is among 18 communities to be awarded the designation during the latest round of 2010 applications.  Overall, Charleston joins 158 communities (out of 400 applicants) in 43 states to receive this honor.  The City must continue to make improvements for bicycling over the next 4 years when the community is reevaluated.  Improvements can lead to higher designations at the silver, gold and platinum levels.

Charleston Mayor Joseph P. Riley, Jr. and City Council adopted an action plan endorsed by the League of American Bicyclists signifying the City’s commitment to become a Bicycle Friendly Community at City Council meeting on May 12, 2009.  Mayor Riley said, “The Bicycle Friendly Community designation is an award we are proud to achieve.  Charleston is a great city for bicycling as evidenced by its increasing popularity among bicycle commuters, families enjoying the outdoors, those pursuing a healthy lifestyle or those getting into competitive form.  The bicycle and pedestrian lane on the Ravenel Bridge has boosted demand for even more facilities and connections that allow the safe and convenient use of the bicycle as both a means of recreation and transportation.

The City of Charleston also recognizes the dedicated efforts of our local bicycle groups such as Charleston Moves, Coastal Cyclists and the Holy City Bike Co-op as instrumental in advocating for and promoting bicycling here. ”

The City of Charleston is making progress in meeting the demand for more bicycle parking facilities, paths, lanes and routes throughout the community.  The City is continually installing new bicycle parking throughout the downtown commercial district and public buildings and parks.  Since 2007 the City has built a bicycle/pedestrian path along Ashley River Road, an extension of the West Ashley Greenway, the continuation of the Ravenel Bridge path along East Bay Street, and the West Ashley Bikeway extension.

The next major projects are the addition of bicycle lanes to Saint Andrews Boulevard, improvements to several miles of the West Ashley Greenway and construction of a separated bike/pedestrian lane on the T. Allen Legare Bridge to connect the Charleston peninsula with the West Ashley Greenway.  The City and advocacy groups work closely with Charleston County, Berkeley County and SCDOT to ensure bicycle and pedestrian facilities are included in new road and bridge projects such as Bees Ferry Road, Harbor View Road and the proposed extension of Interstate 526.

The City and bicycle groups such as Charleston Moves, Coastal Cyclists and the Holy City Bike Co-op have also engaged in programs and events that help encourage cycling in Charleston.  Bike to Work Day helps get employees on their bikes and thinking about ways to get around the City without their cars.  Organized rides and events help promote cycling as transportation and part of a healthy lifestyle.  Bicycle groups often engage the community with bicycle safety and education campaigns; including workshops, bike clinics, and advertisements.  The City and other organizations also participate in Safe Routes to Schools programs and bicycle rodeos for children.

For more information on bicycle-friendly communities go to: