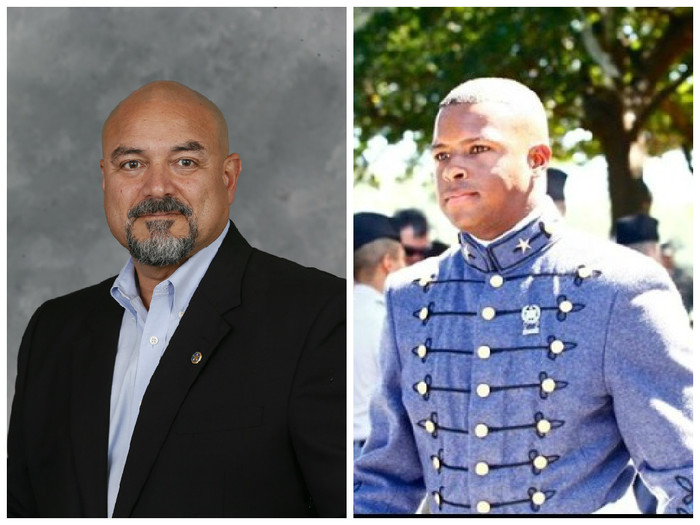 10:07 am on Friday May 22, 2015 | Posted by The Citadel
Keeping America safe: a look at one of the nation’s top producers of criminal justice professionals

There is one, very definable thing that people who get accepted into The Citadel’s Department of Criminal Justice share.  That’s according to the retired secret service special agent in charge teaching many of the future detectives, police officers and special service agents attending The Military College of South Carolina.

“They all come in here focused and intent on helping keep their country and communities safe – they simply possess a strong sense of purpose,” says Edwin Lugo, visiting instructor at The Citadel.  “It’s the common thread of what drew me to be an agent and brings these young men and women to our program− the desire to help make things right,” said Lugo. “I have always had a sense of wanting to help someone who can’t help him or herself.”

Cadet Raymond St. John, a Citadel Class of 2015 criminal justice graduate agrees with his former instructor. “I chose criminal justice because I have always wanted to be law enforcement. I wanted a career where I could make an impact in the world right around me.”

St. John is in the police academy for the Charlotte-Mecklenburg Police Department, “one of the best departments in the nation,” according to St. John. He was hired six months before officially graduating, which is not unusual for The Citadel’s criminal justice majors. “They are in demand,” Lugo said. “Finding work is not an issue, it’s making a decision about where to serve that can be more of a challenge.”

When walking into Lugo’s office, a visitor will find skulls and bullet proof vests, among other things, that he uses in demonstrations. In his classes, he shows students videos of him shaking Bill Clinton’s hand in the oval office and working undercover operations to establish his experience and validity as a professor.  But when it comes to teaching cadets about being agents of criminal justice, he concentrates on science, logic and the law.

Lugo says the college provides in an in-depth, innovative, and engaging criminal justice discipline. “I consider it a privilege to teach here—we are looking toward the future. This institution develops ethical leaders by teaching cadets and students how to make tough, smart, well-founded decisions,” Lugo said.

“My favorite classes were with Professor Lugo,” St. John said. “He didn’t just read from a book or PowerPoint. He teaches from real experiences and he introduced us to professionals from different agencies that were also among the best in their areas. He helped us visualize the lessons.”

Lugo recently laid out the entire “footprint” of the shooting of Michael Brown by a police officer in Ferguson, Missouri.  He walked the course, detailing all the evidence including images, witness statements, bullet trajectories and pertinent facts about the police officer and the victim. “As unfortunate as it is, these real-life cases provide the theater from which we can draw some of our most important learnings,” Lugo said.

Another criminal justice professor at The Citadel, Capt. Brian Norris, Ph.D., uses the book In Cold Blood by Truman Capote to walk his students through a crime scene, gathering evidence and clues along the way as they read.  The students in all of his classes are exposed to the same information in each class, yet new ideas continue to surface.

Criminal justice is a highly sought-after major at The Citadel—in fact, year after year it is the second most popular major, following closely behind business administration.

“The Citadel has phenomenal teachers. They don’t just tell us how to do things; we actually practice investigative techniques ourselves. It is the best criminal justice program in the country in my opinion,” stated St. John.

What types of students excel in criminal justice careers? “A criminal justice major cannot be shy. They have to have a take-charge personality and feel empowered to serve. They should also be able to maintain a calm demeanor when encountering potentially volatile situations,” said Lugo.

In 2015, it’s estimated that more than 1,000 alumni of the college are working in some realm of criminal justice either as civilians or in the military. More than 400 undergraduate cadets and students enrolled to earn a bachelor’s degree criminal justice in the 2015-16 academic year at The Citadel. Additionally, The Citadel offers a minor or graduate certificate in Cyber Security, master’s degree in Social Science, and a graduate certificate in Homeland Security and Intelligence Analysis.

“The Citadel’s Corps of Cadets experience a highly rigorous environment from every standpoint, building the perfect foundation for a career in a competitive and sometimes grueling field,” said St. John. “From time management, to working within a team of very different personalities, to living by a code of honor and integrity, The Citadel provides exactly the kind of environment that produces some of the most effective criminal justice professionals in America.”

St. John is one of more than five members of the Class of 2015 already working with police departments. Another is at the U.S. Foreign Service Academy training for a position with the Diplomatic Security Corps. There is a recent graduate training with the Secret Service, another about to enter law school and numerous graduates who commissioned as officers into military security and intelligence roles.  In all, more than a dozen 2015 criminal justice graduates are already well on their way toward futures that should help fulfill that strong sense of purpose they all share.

Megan Campbell, a native of Clemson, South Carolina, is a graduate assistant in the Office of Communications and Marketing at The Citadel. She received her undergraduate degree in graphic communications from Clemson University in 2010. Campbell is currently pursuing her master’s degree in secondary education with a concentration in English and hopes to graduate in December 2016.