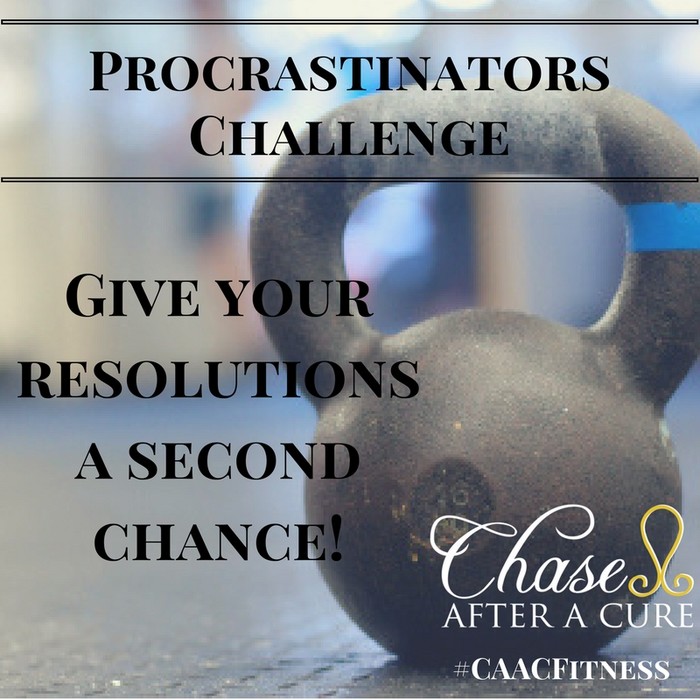 3:24 pm on Wednesday March 1, 2017 | Posted by HAF Creative
Get Those Fitness Goals Back on Track and Support Chase After a Cure in the Procrastinators Challenge

You started the New Year hitting the gym, running through the neighborhood, taking a bootcamp class three times a week. And then life got busy. Now, your New Year’s resolutions are busted. Who says you can’t have a do-over? Beginning March 1, join Chase After a Cure for the Procrastinators Challenge and give your resolutions a second chance.

Get your resolutions back on track and get fit – all while raising money for a great cause. The Procrastinators Challenge runs March, April and May and is open to any individual, in any location.

Participants can sign up for one month or all three months. They select the number of workouts they want to achieve in that time period (such as 16 works in one month). Then, individuals set a fundraising goal of at least $500.

The money raised will go to Chase After a Cure’s work funding innovative research and promising clinical trials that have the potential to immediately impact the lives of pediatric cancer patients. Since its founding, Chase After a Cure has awarded more than half a million dollars to pediatric cancer research at the Medical University of South Carolina Children’s Hospital.

Cancer is the No. 1 cause of death by disease among children. In fact, the incidence of childhood cancer has been rising about 0.6 percent each year since the mid-1970s, resulting in an overall increase of 24 percent over the last 40 years.

Despite the growing number of children diagnosed with a form of pediatric cancer only three drugs have been approved by the Food and Drug Administration.

“We know, in comparison to other cancers, little federal money is dedicated to pediatric cancer research. That’s why our organization is so committed to raising funds for research, clinical trials and equipment that will lead to life-saving treatments and medications,” said Adam White, executive director of Chase After a Cure. “Even though the Procrastinators Challenge is a fun way to promote fitness and exercise, it’s truly about raising money and spreading awareness.”

Participants in the Procrastinators Challenge are encouraged to share their fundraising page on social media or via email with friends, family and co-workers. There’s nothing wrong with encouraging others to sign up and getting a little friendly competition going in the gym or the office. Participants are also urged to share workout selfies and videos to social media using hashtag #CAACFitness.

Prizes will be given each month to the team/individual that raises the most money. Prizes also will be awarded each month for those who work out/track and share the most.

To sign up for the Procrastinators Challenge, visit www.crowdrise.com/ProcastinatorsChallenge.

About Chase After a Cure
Chase After a Cure was started in 2009 by Summerville, S.C., resident Whitney Ringler and her family after her son, Chase, was given a 30 percent chance of survival after being diagnosed with Stage 4 neuroblastoma. Chase survived this aggressive form of cancer. Chase After a Cure is dedicated to funding research and raising awareness for alternative and more effective treatments for children with cancer with a specific focus on hard-to-treat cancers such as neuroblastoma. For more information, visit www.chaseafteracure.com.