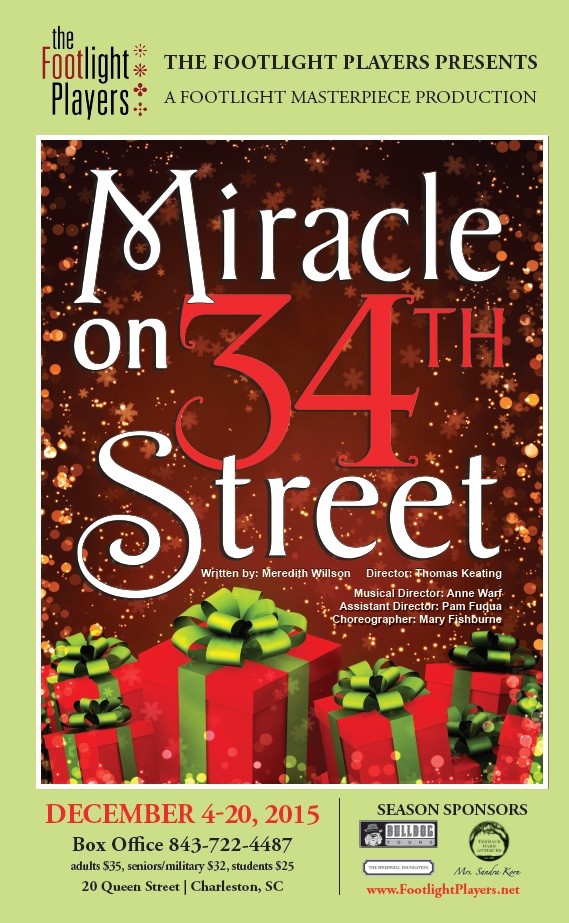 The Footlight Players will perform a beloved holiday classic this season as they bring to stage “Miracle on 34th Street.” Based on the 1947 Oscar-winning film of the same title, this family friendly performance runs Dec. 4-20 at the historic Footlight Players Theatre.

In this musical production, Kris Kringle takes on the cynics in this story of a lovable white-bearded gentleman who claims to be the real Santa Claus. Written by Meredith Willson, author of “The Music Man” and “The Unsinkable Molly Brown,” the story follows Kris Kringle as he spreads a wave of love throughout New York City, fostering camaraderie between Macy’s and Gimble’s department stores and convincing a cynical, single mother and her somber daughter that there is indeed a Santa Claus.

In 1963 a musical adaptation of the film opened on Broadway. Originally titled “Here’s Love,” it was later renamed to the more recognizable “Miracle on 34th Street.” The film version also was redone in 1994.

“Christmas shows seem to be my forte of late,” Keating said. “Maybe it’s when I’m free or that I am somehow ‘destined’ to direct the family friendly and holiday, joy-inspiring fare. I’m not sure. But, it’s always a joy for me to gather a community of people together to celebrate the season.”

The theater will be decorated for the holiday season including Charleston area children’s holiday-inspired artwork on display in the lobby. Any elementary school-age children in the tri-county are invited to submit their artwork. The deadline is 5 p.m. on Friday, Nov. 20. Submissions may be any size paper and can be dropped off or mailed to the theater at 20 Queen St., Charleston, SC 29401. For questions, call the box office at 843-722-4487.

I am very happy to know that the Footlight Players will perform a beloved holiday classic this season as they bring to stage “Miracle on 34th Street. I am sure that it will be very grand event. I like to see such performances. ipad 2 wholesale

It is really a good decision by Footlight Players to organize a holiday classic program ‘Miracle on 34th Street’. I think it mainly includes music programs. I am free in those days and I will surely try to attend the program. Thanks for sharing. top medical billing companies

I really appreciate the decision taken by the Footlight Players for organizing a holiday program for all the players. I guess you are conducting some musical programs and I really want to attend this event. Please provide the venue and date for the event. best internet

I am supporting the decision of these football players. I think conducting these types of holiday programs will be useful to them to get relaxed. Please provide the details of various activities that you are organized as the part of this holiday program. mobile home manufacturers

You have some truly incredible posts and I feel I would be a decent resource.2014 honda odyssey car covers