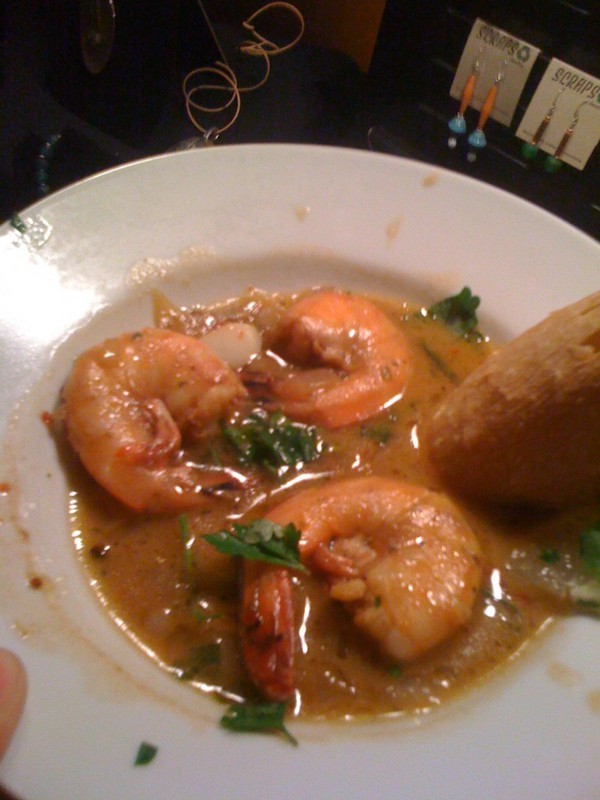 When Jimihatt and the good folks over at Guerrilla Cuisine announced the location for their "BBQ and Rock 'n Roll"-themed event, I suddenly had flashbacks of the second anniversary dinner held at Legare Farms: long, winding roads and turns that most human beings could not readily identify.

This was a tad bit different, though. There was still daylight to work with and the roads were clearly marked with traffic signs/lights. I was much closer to civilization this time around.

The location, Mixson, is reminiscent of one of those overly gentrified, cookie-cutter homes that the well-to-do stamped out in the middle of one of those "less-than-savory" neighborhoods you hear about.

But beyond the pomp and circumstance stood a modest and functional barn-style gazebo that served as the perfect place for some down home BBQ dinner courtesy of pit master, Brian Schiltz.

The first course was composed of a pulled pork egg roll with Georgia peach, ginger and pepper flake sauce (think "sweet and sour"). This starter wasn't exactly my favorite dish, namely because the richness of the slow-cooked pork was masked by the egg roll itself. Perhaps it was over fried, but it was very similar to the obligatory roll that you would get in a $7.95 combo platter at your nearest Chinese restaurant.

The second course, though, made me completely forget about the first. Chef graced the crowd with an Orleans-style BBQ shrimp that came swimming in an amazing broth made with Abita beer and tinge of citrus (lemon grass, if I'm not mistaken).

People. I promise you all if it wasn't socially frowned upon, I would have bathed in that broth. It was a broth so good, the perfectly cooked shrimp became an afterthought. It got to a point where patrons were knife fighting each other for extra dipping bread. It was just that good.

Third course kind of destroyed everyone's expectations as if the second course was the crescendo. Enter: a baby back and spare rib combo with a rough-cut slaw complete with julienned Granny Smith apple. Notwithstanding the sheer decadence that is the spare rib, the audacity to pair it with its daintier cousin was bold, but so necessary.

Fourth course comes and you could tell the crowd (read: this guy) needed just a little more time to recover. But there's apparently no rest for the weary in the BBQ realm, because the servers unapologetically slapped a platter of Texas beef brisket (both base and point sections), with smashed potatoes. These potatoes were special, though. White cheddar, butter and what the chef lovingly referred to as "burnt ends". Now, burnt ends are the delicious, oftentimes fatty bits of a brisket that has been slow cooked longer than usual. Most people would have looked at this as overkill for a mere spoonful of potatoes, but my belly couldn't have been happier.

The final dessert course was simple, and rightfully so. After the roller coaster of flavors that we were subjected to, it was comforting to know that BBQ could scale itself back and leave room for something more delicate. A homemade coconut cake, made by the chef's wife, was crucial to setting the tone for the rest of the evening. Light, perfectly rich and surprisingly modest, the cake kind of just killed you softly from the inside out. I have no doubt in my mind that she made former family matriarchs proud.

All in all, the dinner was great. I'm excited to see what chef Schiltz will bring to the Lowcounty. Heaven knows it would be nice to have a chef in this town that doesn't rely on some gimmick or over-the-top personality and just makes good, simple food.