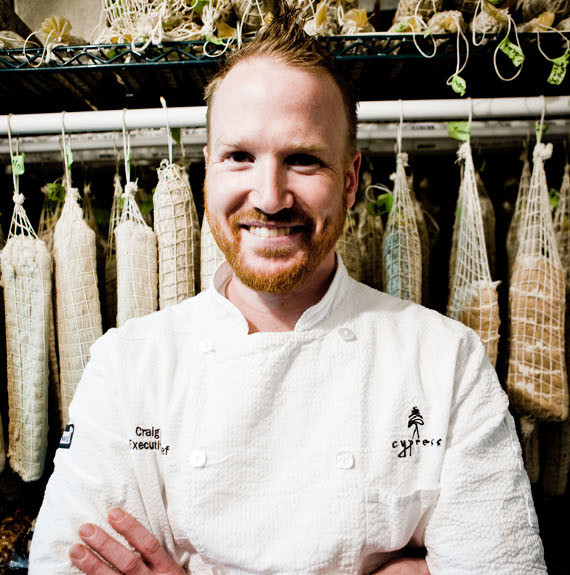 Executive chef Craig Deihl of Cypress has been named a finalist for the coveted James Beard award, Best Chef Southeast.

Deihl, a native of Danville, Penn., began his Charleston career in 1996 after graduating from Johnson & Wales University Charleston. During his tenure at Magnolias, he honed his skills in the kitchen for nearly five years before opening Cypress as the chef de cuisine in 2001. He is the author of Cypress, a cookbook that explores the regaled restaurant’s signature dishes and Deihl’s sustainable acumen. Recognizing his steadfast observance of the Sustainable Seafood Initiative’s guidelines and outstanding culinary talents, Deihl was asked to be a contributor to the Smithsonian Institute’s One Fish, Two Fish, Crawfish, Bluefish, a cookbook and guide to sustainable seafood.

An active proponent of local sourcing and sustainable food practices, Deihl created a CSA-like concept, Artisan Meat Share, and is the first chef in over 100 years to cook the rare American Guinea Hog through a partnership with the American Livestock Breeds Conservancy (ALBC) and farmer Gra Moore of Carolina Heritage Farm.

Deihl joins a rank of venerable chefs such as five-time nominee Hugh Acheson of Five and Ten in Athens, Ga., and thrice-nominated Linton Hopkins of Restaurant Eugene Atlanta, as a 2012 nominee. Winners of the chef and restaurant awards will be announced at the 2012 James Beard Foundation Awards in New York on Monday, May 7th.

The winners for Best Chef Southeast were:

Hugh Acheson of Five and Ten in Athens, GA and Linton Hopkins of Restaurant Eugene in Atlanta.

You can take a look a the complete list of last night's winner here.