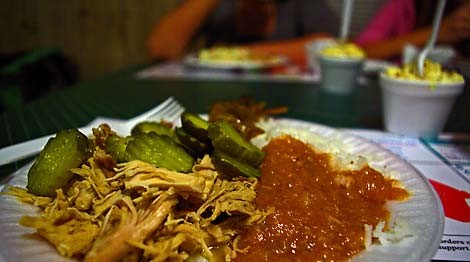 Image by Ken Hawkins/TheDigitelImage by 20081011sweatmans.jpg That's their delicious banana pudding hiding in the background. Check out more photo's in our Flickr photo gallery.

Spooky. Check out more photo's in our Flickr photo gallery.The approach to the rustic old farmhouse is long and very rural, if you take the interstate up from Charleston you'll take Exit 177, drive past a few industrial plants eventually arriving in downtown Holly Hill, passing through the small downtown you'll drive past miles of trees and farms, eventually arriving at the giant white pig sign and farmhouse that is Sweatman's.

I arrived around 8 p.m. on a Saturday, parked and walked to the building that was set back from the road and largely unpainted, it is almost haunting at night.

But once I walked in my eyes glossed over the standard BBQ kitsch, quickly spotting the buffet in the adjoining room. I walked up to the register and paid my $10 (cash only) for the buffet and a sweet tea.

Grabbing a plate, I wasted no time pilling up the rice, hash, mustard-slathered ribs, and dark and light pulled pork. I added a slice of white bread and a pinch of pickles and cole slaw for good measure, but those are just distractions.

And, that's it, you'll find no greens, mac-and-cheese, or mashed potatoes on this buffet line.

The food was, in a word: incredible.

I'd delve more into how so, but that's already been discussed many many many times. Here's what Alison Cook from Texas' Houston Chronicole thought:
I liked the dark [pulled-pork] better, both for its quotient of burnished exterior meat and its wood-fired flavor; the light meat struck me as dryish and a bit mealy, even with generous applications of the sharply sour/sweet mustard sauce, which poured from a serve-it-yourself spigot.

While I wasn't transported by the pulled pork here, I did love the ribs. They were tender and sticky while still having enough resilience to give your teeth a workout, and the sweet tinge in the mustardy baste did not get in the way. When we went back for seconds, though, we found the next batch of ribs a little too steamed and soft, as if they had been waiting around in an enclosed vat. They were good enough, but not great, as the first batch had been.

Also, they offer only one desert: Banana pudding. I found it cake-battery and delicious.

Well, there you have it. Here's some things you need to know: They're only open Fridays and Saturdays from 11:30 a.m to 9 p.m. and it's cash only. Oh, and gas was a good 20 cents cheaper than in Charleston. And that's a good thing, as it's a bit hard to find. Rather than give you spotty directions, use this link to Google Maps.

Want to know more about South Carolina's BBQ? Check out the Charleston City Paper round up of the state's better joints. Word to the wise: That article is two years old, so call before going.