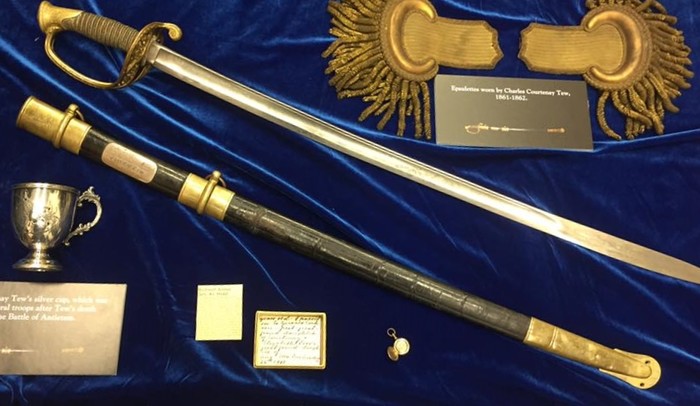 12:55 pm on Monday September 21, 2015 | Posted by The Citadel
Finally home at The Citadel after one and a half centuries

The sword that belonged to The Citadel’s first honor graduate is back in the hands of the college after being lost for 153 years. After three days of ceremonies and more than 2,500 miles of travel by Canada’s 33rd Signal Regiment, the sword belonging to Col. Charles Courtenay Tew is on display on the iconic Charleston, South Carolina campus. Tew, who was a member of The Citadel Class of 1846, was the college’s first valedictorian, the first president of the alumni association, and the first graduate to be declared missing in action.

The sword was given to Tew by a group of cadets when he was a young teacher at The Arsenal, a military in Columbia that was burned by Union troops. When the Civil War began, Tew took that engraved sword with him into battle, along with a silver cup that was a gift from a different group of cadets. Witnesses said he died clutching his sword on Sept. 17, 1862, during the Battle of Antietam. Tew was then deprived of his most valuable possession as it fell into the hands of his enemies.

The colonel’s father searched for his son’s possessions for years as did others in his family. They did not know that someone from New York, who had moved to Canada, had donated it to the Canadian Army regiment now called the 33 Signal Regiment. The regiment had all of its possessions appraised in 2009 and learned about the story of the sword, and later went through the process of legally returning it to the college.

On Sept. 16, a group of Citadel cadets and faculty members traveled to the Antietam National Battlefield in Sharpsburg, Maryland, to meet the Canadian regiment and witness a ceremony as the sword was repatriated from Canada to the U.S. The regiment then traveled to The Citadel for a reception and sword display on the 153th year, to the day, of Tew’s death that was followed by a formal presentation before the college’s weekly dress parade. It was Regimental Commander, Jimmy Urban, who accepted the sword on behalf of the college.

The sword’s return marks the end to a long and tedious journey by Tew’s descendants to find the sword. Tew’s great-great-granddaughter, Caroline Sloan, was on campus for the ceremonies and said she believed the sword should be place at The Citadel not only to honor Tew, but to remind cadets of the sacrifices their predecessor made more than a decade and a half before them – to attest to his honor, duty and respect.

Tew’s legacy is now supported not only by his portraits at The Citadel, by by his sword, and also his cup. The cup is on loan to the college from one of Tew’s descendants who brought it to compliment the collection at the same time the sword was repatriated.

Cadet Devin Taylor is Regimental Public Affairs NCO. He is majoring in accounting and will graduate with The Citadel Class of 2017.

It is good news that the sword reached the hands of college after 153 years. They lost the sword that belonged to the Citadel’s first honor graduate and finally they got it back. From the photo itself it is clear that it is very powerful sword. dish network channel guide

I have never visited this site before and so I don’t know much about this site. My friend is a regular visitor of this site and she has given a very good feedback about this site. After reading this article I got a good idea about Sword. best cable deals

I am glad to know that the sword that once belonged to The Citadel’s first honor is back after being lost for 153 years. The picture of the sword depict that it is a very powerful sword. Thank you for sharing this information. rent ipad