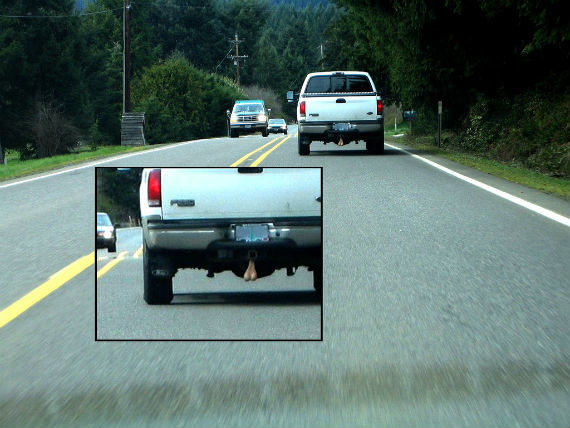 12:30 pm on Tuesday August 2, 2011 | Posted by Katrina Robinson
Truck Nutz: Disgusting or hilarious? Either way, they're against the law (update: trial date set)

Update August 2: The Truck Nutz trial is heading to court at 10 a.m. on Sept. 21st, assuming that a judge doesn't dismiss it before then.

Charleston attorney Scott Bischoff will be representing Virginia Tice, who received a $445 ticket for having large red Truck Nutz hanging off her pickup truck.

Get more deets on the upcoming trial over at The Post and Courier's report here.﻿

First reporting: If this is the first time you've encountered truck testicles, then you've certainly been hiding under a rock with a thick pop-culture barrier.

Truck Nutz are fake testicles that hang from the vehicle's bumper. And apparently, the law doesn't look too kindly on them.

Virginia Tice has a pair hanging from her pickup truck, and she's headed to court today to discuss a ticket she received for violating South Carolina's law on obscene bumper stickers. At this point, the question is whether or not Virginia Tice's Truck Nutz can be described as offensive "as determined by contemporary community standards, sexual acts, excretory functions, or parts of the human body."

While I, personally, find Truck Nutz hilarious, I know that there are many that find them offensive. And I wouldn't want to be in a car with a little kid when the question of "What are those things hanging from that guy's truck?" comes up.

What do you think? Are Tice's Truck Nutz taking things a little too far, or is this ticket a violationg of her right to freedom of expression?