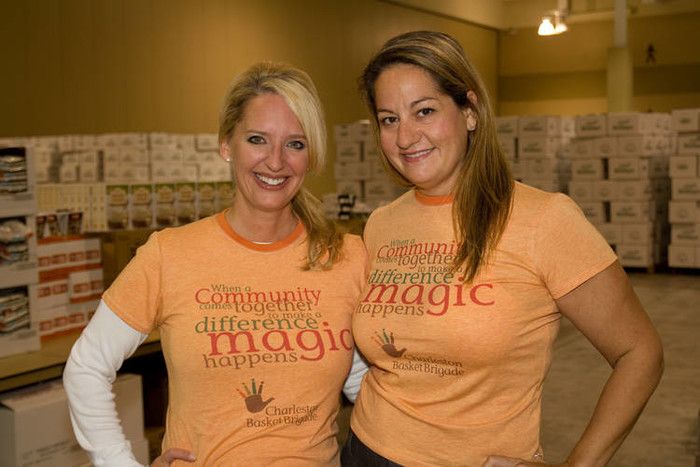 5:33 am on Thursday November 24, 2011 | Posted by EmilyTrogdon
Charleston Basket Brigade delivers over 2,500 Thanksgiving meals to locals in need

The event took place on Tuesday, November 22nd, at the Charleston Area Convention Center from 7 to 10:30 a.m. The duo partnered with Carolina One Real Estate, Piggly Wiggly, Communities In Schools and Momentum Marketing to feed an estimated 15,000 people on Thanksgiving Day by raising approximately $75,000 through the efforts of hundreds of local volunteers and concerned citizens. In the past three years, the Charleston Basket Brigade has raised a total of $63,990 and fed more than 12,000 local residents in need.  This year’s event was the largest ever for the organization more than doubling the results of the prior three years.

Over 250 volunteers gathered at the Charleston Area Convention Center.  Volunteers were assigned various jobs on each of the three assembly lines and in the back loading area where boxed meals were loaded into cars, buses and trucks.

Hartley said, “This event was tremendous!  We had volunteers from all walks of life… children, senior citizens, the Coast Guard, and even some folks who just moved into the area and heard about it on the news.  We were blown away by the hearts of these people and the sheer energy they put into serving others.”

Scarafile added, “Our event was completed in just three and a half hours.  To think we assembled, delivered and cleaned up the convention center in record time was due to the commitment of so many concerned citizens and loving people.  We were overjoyed.”

Garth Cook, Boeing employee and CBB volunteer said, “When I walked into the convention center and saw how enormous this effort was, I was overwhelmed by the scope of it all. To see thousands of empty boxes and row after row of food ready be assembled was incredible.  Together we made a difference today in this community and I was proud to be a part of it.”

Meghan Porter, owner of Charleston Children’s Boutique and CBB volunteer delivered meals to a local school for distribution to eight families.  She said that a school official told her that these meals “meant more than she could ever know”.  He explained that some of these kids don’t eat over the weekends, and often their only meal of the day is a school lunch.  “I experienced so much grace and loving kindness when I delivered the meals.  One of the children that helped me unload the boxes was actually a meal recipient and he thanked me over and over.  It touched my heart in a way I could have never predicted.”

Since October, the CBB has participated in several local events to raise money. As a beneficiary of Daniel Island Park Day on October 22, Brigade volunteers earned $1,220 in proceeds from the jump castles at the event. On November 5, the Brigade collected donations from the Towne Centre Tobacco and Wine Anniversary Wine Tasting event, which yielded more than $600.00 for the organization.

Additional assistance in fundraising has been initiated from concerned citizens throughout the community. JKI Karate on Daniel Island created a turkey coloring fundraiser for the month of November. Kimberly Allen and Brent Dameron, employees of Benefitfocus based on Daniel Island, started a company-wide effort to feed 450 families for the Brigade.  Alisa McLean of Scientific Research Corporation in North Charleston organized a lunch and bake sale to raise $880.00. Meryl Cromarty raised over $1,600 from her Daniel Island Real Estate office.  Michael and Cori Smith of Daniel Island and their three young sons raised $100 from baking cupcakes and brownies.  10-year-old Elysse Pardus went door to door in her I’On neighborhood to raise $1300.00 singlehandedly.

About a week and a half ago, the Brigade received an unexpected call from Christopher Ibsen of Piggly Wiggly Carolina Co. with news that the company would be donating $10,000 in a food credit to help the group reach their goal. Scarafile said, “This is the single largest donation we’ve ever received and we feel so blessed to have Piggly Wiggly as our food partner. They already contribute so much and this was over the top!”

Derek Pace, store manager for Piggly Wiggly and CBB key organizer since 2009 organizes the food order and delivery from the Piggly Wiggly team each year.  “This would not be possible without Derek Pace, who spends hundreds of hours coordinating the food end of things,” said Scarafile.  “He was there all day on Monday with two delivery men unloading palettes from several semi-trucks.  He was back at 6am on Tuesday making sure our turkeys, butter and pumpkin pies were off the refrigerated trucks.  He’s with us in this from start to finish,” added Scarafile. “Derek is a good Samaritan with a huge heart and Piggly Wiggly and we couldn’t do it without him,” said Hartley.

Close friends Hartley and Scarafile began The Charleston Basket Brigade in 2008 with a commitment to bring the community together to provide Thanksgiving meals for families in need in the Charleston area. More than 800 Carolina One Real Estate staffers, agents and event volunteers raise money and help with the volunteer effort. Communities In Schools (CIS), a non-profit dropout prevention organization with 27 counselors in 18 schools throughout Charleston and Berkeley County, locates the families that will receive meals based on need and maps out directions for delivery. With the help of numerous partner organizations, CIS also reaches out to Dorchester County agencies to find families in need. Piggly Wiggly provides discounts on food, donates boxes, and delivers food to the Coliseum for assembly and delivery. Momentum Marketing (Hartley’s company) provides public relations, marketing, fundraising and event coordination assistance.

“It only takes $30 to feed a family of six at Thanksgiving and every single penny we collect goes toward buying food,” said Scarafile. Hartley interjected, “And this year, we had such a diverse fundraising structure to enable anyone in this community to contribute in one way or another.”

Individual and corporate donations can be made online at www.charlestonbasketbrigade.com.  All major credit cards are accepted and 100% of the donations go towards buying food.