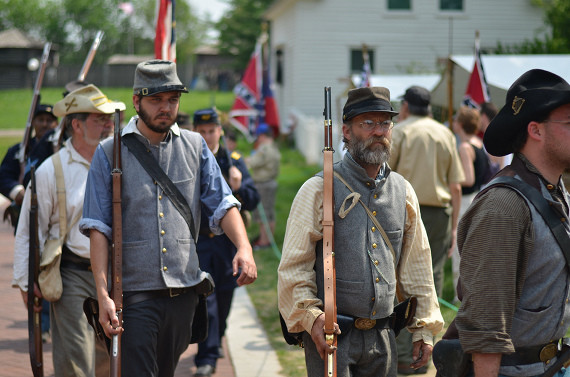 10:29 am on Monday February 18, 2013 | Posted by Amanda Click
Early info on the 9th annual Battle of Charleston reenactment

From March 22 - 24, Legare Farms and the 7th SC Infantry will both host and present the 9th annual Battle of Charleston.

During the weekend-long event, both reenactors and spectators are invited to explore the living history of American Civil War. In addition to battle reenactments, guests can experience period vendors on “sutlers row," blacksmiths, cavalry demonstrations, artillery demonstrations, and food. As a special treat this year, a real wedding, done in period style will take place on Saturday, March 23.

A full breakdown of what's happening when can be found on the official Battle of Charleston events page.

As for the actual Battle of Charleston - which is more aptly named The Battle of Bloody Bridge - here's some history for you, as recounted on the event's official website:

The Battle of Burdens Causeway or the Battle of Bloody Bridge, was the largest battle on Johns Island during the Civil War. In July of 1864, the Confederates still defending Charleston had control of James Island and Johns Island.

The barrier islands, Folly and Morris were under Union control. The unions forces were planning an all our attack on Charleston. Attack were planned at five different location around the Charleston area.

At this time, the Union would start its third major bombardment of Fort Sumter, and to keep the citizens of Charleston from becoming complacent, an intense fire would be directed against the city. The Union command figured that they outnumbered the Confederates and hoped that somewhere their attacks would break through the defenders on James or Johns Island, and thus flanked, Charleston would fall.

For anything and everything you might want to know about the upcoming Battle of Charleston, click here.