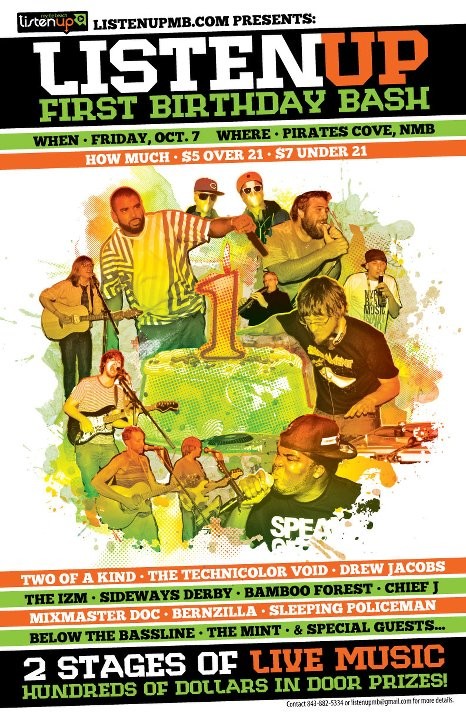 7:50 am on Wednesday September 28, 2011 | Posted by
ListenUpMB celebrates one year anniversary with huge Fall music show

ListenUp Myrtle Beach is celebrating their one year anniversary with a huge show featuring some of the best in the local music game.

ListenUp Myrtle Beach, the area's premier home to local music news, events, and band information is one year-old and to give thanks is throwing a party at North Myrtle Beach's Pirate's Cove on Friday, October 7th, starting at 7:00 p.m. and rockin' on until 2:00 a.m.

Come out and help ListenUp Myrtle Beach celebrate our first year of bringing you the area's best local music news and hottest bands with a dozen live acts across two stages plus:

To go along with ListenUp's one year anniversary, their website is undergoing a redesign and is currently down. But, have no fear, ListenUpMB.com will be back up Monday, October 3rd.

Hop on over to ListenUpMB's Facebook Event Page and let them know you'll be there to support them and Myrtle Beach Music. ﻿