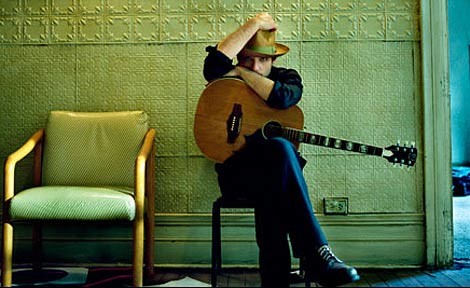 Image by James MinchinImage by 20080615dylan.jpg Jakob Dylan has created his first solo album and will perform in Charleston on Tuesday.

Jakob Dylan has just finished his first solo production without The Wallflowers. The new album was released June 10th and is called Seeing Things (listen to it). Rolling Stone offers this tidbit on the album and 2.5 out of 5 stars:
Trying to live down his daddy's legend, Jakob enlists producer Rick Rubin, who captured the essence of another icon, Johnny Cash, in a series of stripped-down folk albums.

But Jakob doesn't have the lyrical gift to augment these spare songs, and tracks like "Everybody Pays As They Go" — little more than acoustic guitar and vocals — could have benefited from the muscular guitars and soulful organ of his band, the Wallflowers.

There are some high points — the pretty ballad "On Up the Mountain" and the feel-good pop song "Something Good This Way Comes" — but he needs more than competent folk rock to be taken seriously on his own terms.