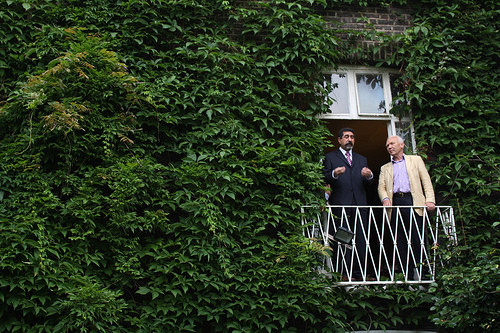 Update September 16: The patio is officially open today, September 16, at 4 p.m. Drop by for a cool breeze and their happy hour specials of $2 margaritas, $2 house drinks, and $2.50 bartenders draft choice.

After eight years of court battles, zoning hearings and noise ordinances, the downtown Mellow Mushroom has finally secured the newest addition to its historic location.

Michael Shem-Tov, Johnny Hudgins and Joshua Broome held a press conference yesterday that culminated with the unveiling of the newly constucted back patio and bathroom area that can accomodate up to 50 more pizza patrons.

With a mural from artist, Scott Parsons, which depicted a skyscape complete with hot-air balloons and fireworks, the patio still has a few pending additions like extra lighting and sound system upgrades.

Soft and grand openings are slated for late September and early November.

If you want to know the nitty gritty, check out these Qik videos from the rooftop during their press event.

Update September 11: Preview has but up a brief that has some additional details.