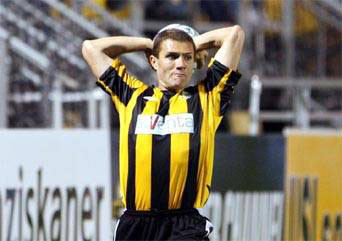 The Charleston Battery are off to Cary, N.C., on Saturday, May 9, for a 7 p.m. match against the league-leading Carolina RailHawks.

For their part, The Battery is unbeaten this year, with one win and three ties and enters the game in fifth position in the USL First Division.

Read more stories on this subject in our Battery topic page.The Battery has never won a game versus the RailHawks. In the two years that the teams have been playing each other Carolina has posted a perfect record against Charleston with six wins out of six games played.

Charleston secured its first win of the season last Saturday night with a 1-0 victory versus the Miami FC Blues in a game played at Lockhart Stadium in Fort Lauderdale; midfielder Ian Fuller headed home the winner in the 75th minute.

Charleston Battery goalkeeper Dusty Hudock made four saves to preserve the shut-out, his league-leading third of the season.

You can follow Saturday's game on local Sports Radio 1450 AM starting at 6:45 p.m. or by a live video feed at USLLive.com.

Here are more details from an e-mailed release:

The RailHawks were in Portland, OR last weekend for consecutive games against the Portland Timbers. They tied the first match 0-0 then lost the second game of the series 2-0.

Carolina began the season with three wins in succession beating Minnesota twice and the Rochester Rhinos; all three wins came at home.

Charleston Battery head coach Mike Anhaeuser should have a full squad available for selection Saturday night. The only projected missing player is Jamaican defender O’Brian Woodbine who continues his recovery from a broken foot sustained during pre-season

Carolina’s roster underwent a complete overhaul during the off-season with new head coach Martin Rennie bringing in an almost entirely new squad; only four players remain from the 2008 season. Former Charleston Battery forwards Gavin Glinton and Aaron King were among the players signed; King has since been loaned out to the Wilmington Hammerheads (USL2).

Matt Bobo honored
Charleston Battery defender Matt Bobo has been named to the USL First Division Team of the Week following an excellent defensive performance in last Saturday’s game versus Miami. Bobo has played every minute of the season thus far; the Battery defense has allowed just one goal in the four games played.