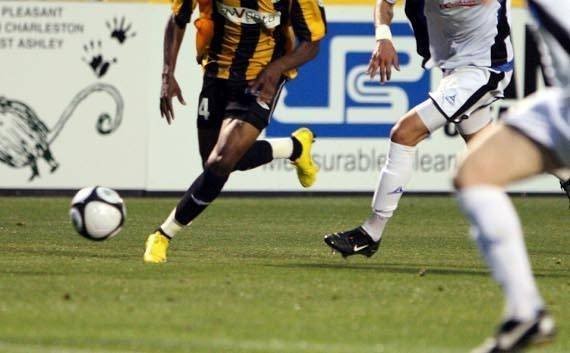 Jose Cuevas had given Charleston the lead but a 90th minute header from Matt Luzanaris and an injury-time winner from former Battery midfielder Ian Fuller lifted Orlando to victory.

The win guarantees Orlando a berth in the 2012 post-season.

The game started brightly for Charleston with Sallieu Bundu getting his head onto a Jose Cuevas free-kick in only the 2nd minute but Orlando goalkeeper Miguel Gallardo made a comfortable save.

Both teams had chances in the first half with Orlando coming closest after Kevin Molino slipped behind the Battery back four in the 33rd minute. Molino hit a powerful shot at the goal but goalkeeper Kevin Klasila made a blocking save with defender John Wilson able to turn the deflection behind for a corner.

After the break Charleston began to enjoy more possession and was rewarded for their endeavor in the 64th minute with the opening goal. The Battery crossed the ball twice into the box with Orlando struggling to clear the danger. Cuevas collected the loose ball at the back of the six-yard box, evaded his defender and drilled a shot past Gallardo at the near post.

Orlando's response was immediate with substitute Jamie Watson striking the cross-bar in the 72nd minute with a shot from just outside the box. But as time began to run out it looked as if the Battery would become only the second team this year to defeat Orlando.

Orlando increased the pressure and finally broke through in the 90th minute with Matt Luzanaris heading home from close-range at the back post.

With the Battery still reeling after conceding the goal Orlando won a corner on the far side. Luke Boden curled the ball across and Ian Fuller met it at the back post and snapped a header past Klasila into the bottom corner.

The Battery heads to Orlando next Friday night to take on the City Lions in the final game of the three match series (7:30 PM / 1340 AM).

First reporting: The Charleston Battery will face the Orlando City Lions tonight, July 19, at Blackbaud Stadium. Gates open at 6 p.m. with kick off set for 7:30 p.m.

The Battery (11-6) enters the game in second place in the USL PRO standings but is ten points behind Orlando (13-1-4). The game versus Orlando will be broadcast live on 1340 AM with the pre-match build-up starting at 7:15 p.m.