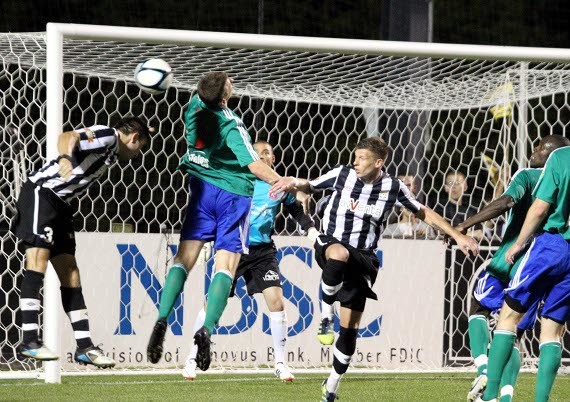 The Charleston Battery defeated Antigua Barracuda FC by a score of 2-0 Friday night at Sir Vivian Richards stadium. Jose Cuevas scored the Battery's first in the 75th minute and JC Mack added a second goal in stoppage time as Charleston earned its tenth win of the season.

'With the way the game was going we were able to pick up a valuable win and three points against some tough conditions,' said Charleston Battery head coach Mike Anhaeuser. 'The team held strong defensively and we will now look ahead and try to gain maximum points in the second game on Sunday.'

The Battery started strong and almost scored in the third minute after midfielder Navion Boyd picked out Tony Donatelli with a curving cross from the near side. Donatelli met the cross but his headed attempt flew over the bar.

Charleston dominated possession throughout the first half but could not find a break-through. Cuevas was denied in the 30th minute by a superb reaction save from goalkeeper Molvin James who swatted away his blast from close-range.

After the break Antigua came back into the contest and began to have some success with a more direct approach. Charleston were forced to defend with numbers but were still able to create chances on the counter-attack.

The deadlock was finally broken after a quick pass out of the back found forward Sallieu Bundu at the halfway line. Bundu held off his defender and slipped a superb pass behind the Antigua right-back. Cuevas ran onto the through-ball and cut back inside two defenders before drilling the ball inside the near post.

As Antigua pressed forward looking for an equalizer space began to open up for Charleston's midfield and the Battery took advantage. With time running out Dino Williams flicked the ball forward to substitute forward JC Mack who fired the ball into the goal from just inside the box.

The Battery completes its two-match series with Antigua on Sunday evening; kick off is set for 7:00PM (1340 AM).

The Battery will be looking to bounce back from last Saturday’s 2-1 road loss versus the Orlando City Lions. The Battery (7-3-0) enters the match tied for second place in the USL PRO standings five points behind Orlando but having played one game less.