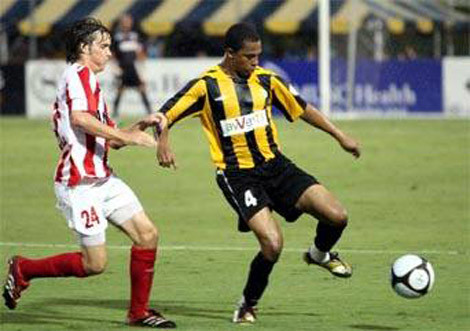 2:54 pm on Monday August 10, 2009 | Posted by Ken Hawkins
After dropping to third, the Battery return home to take on City Stars

After losing their first place standing to Portland, the Charleston Battery return home to Blackbaud Stadium this Tuesday, August 11, to take on the Cleveland City Stars at 7:30 p.m.

Don't forget that it's "Two for Tuesday" where you can get two East Bleacher tickets for the price of one ($10), and they've got $2 drafts at the beer garden.

Here's details of the upcoming match, from an e-mailed release:

The Battery (11-4-8, 41 points) enters the game in third position in the USL First Division one point behind the Portland Timbers and the Carolina RailHawks.

Charleston will be playing its third game in five days on Tuesday night. The Battery defeated the Vancouver Whitecaps 2-1 in a game played last Friday night at Swangard Stadium in Vancouver. On Saturday the Battery fell 3-1 to the Portland Timbers.

Darren Spicer and Randi Patterson supplied the goals in the win versus the Whitecaps; the victory marked the first time that Charleston has defeated Vancouver at Swangard Stadium.

Midfielder Stephen Armstrong scored the lone goal for the Battery in Portland. The Timbers extended their USL record unbeaten streak to twenty games with the win.

Charleston Battery head coach Mike Anhaeuser will not have midfielder Chris Williams available for selection on Tuesday as Williams serves a suspension for the red-card he received in the game versus Portland.

The Battery has played the City Stars twice already this season winning 2-0 at Blackbaud Stadium in May and tying 0-0 in the return fixture played in Cleveland in July.

The City Stars (2-13-7, 13 points) enter the match bottom in the USL First Division 12 points outside of a playoff berth. Cleveland’s last outing was a 2-0 loss versus the Carolina RailHawks suffered Saturday night in Cary, NC.

The City Stars are led by first-year head coach Rod Underwood. Underwood previously served as an assistant coach with the Portland Timbers. Underwood was hired to replace Martin Rennie, who guided the franchise in its first two seasons. Rennie departed for the USL First Division Carolina Rail Hawks before the City Stars were promoted.